We Could Be So Happy 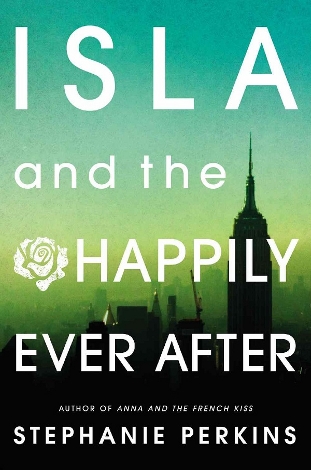 Uniform series cover purists might disagree, but I LOVE the new look for these books. Sure, the cheese factory that is the original Lola design was my main motivation for reading it in the first place, but the new covers are just SO PRETTY. And I can pretend Isla's color scheme is just for me because green is my fave!

While this book report contains no spoilers for Anna and the French Kiss or Lola and the Boy Next Door, characters from one book sometimes show up later on in the series, so reading the books in chronological order makes those cameos even better.

Isla's been crushing on Josh for as long as they've both been at the same boarding school in Paris. After a fateful encounter the summer before their senior year, Isla's unrequited crush might not be so unrequited after all. But when school starts up, Isla and Josh discover that falling in love isn't the hard part; staying together is.

Don't get me wrong; I'd love to be Isla's BFF. She's a fiercely loyal friend; she's top-of-her-class smart; she splits time between Manhattan and Paris; and she has private access to a Parisian rooftop balcony (!!!).

Sure, she lacks a little confidence, esp. when it comes to Josh, and she can be in her own head too much sometimes. Still, Isla is a pretty cool chick with a really sweet life—a life so awesome that I want to bypass the whole friend thing and just BE her! The cities! The food! The boy! (OMG THE BOY.)

And now you know why my original Casting Call for Isla was just me in a red wig.

Just stay with me here; there will be a point to this next anecdote. Even though I don't usually like grownup romance novels, reading about this appendage being inserted into that orifice doesn't actually faze me. I might occasionally grimace because of how painful or unpleasant something sounds, but I don't get shy and bashful about reading sexytimes (or "sexy" times).

Now, Isla and the Happily Ever After...it made me break into irrepressible grins. It made me sigh longingly and blush profusely. It made me dramatically clutch the book to my heart. Well, figuratively speaking for that last part, since I didn't want to be the crazy lady with a Joker smile on public transit. But the grins truly could not be contained.

While Anna and Lola are more focused on couples getting together, Isla takes a look at what happens afterward: the good and the bad. This romance can be sweet, sensual and downright SMOLDERING. But as Flawless Human Taylor Swift would say, this Happily Ever After ain't a fairy tale, either.

I already knew Stephanie Perkins could make me laugh and swoon, but I wasn't prepared for how she'd make me HURT. Each insecurity about and hindrance to the relationship stung, just as each lingering glance and stolen kiss made my heart soar. Isla's voice surpasses those of Perkins' previous heroines in both depth and maturity, resulting in her most raw and profound work yet.

The only writing choice I'm not enamored with is the intermittent insta-translation. Even though it's something I'm never going to be 100% on board with (and therefore feel compelled to point it out), its presence is minimized when the story's firing on all other cylinders, so I didn't mind it here.

To be fair, Josh does have friends; they've just all graduated the year before. But now he's all by his lonesome, save for his everpresent sketchbook. And Isla quickly learns that loving someone from afar isn't the same as knowing them at all.

As far as types go, Josh isn't really mine; I wouldn't be able to carry on a convo about graphic novels and Joann Sfar like Isla could. But he and Isla are just so hot together that it makes him hotter to me, to the point of propositioning him to draw me like one of his French girls.

Isla and her best friend Kurt (who's named after that Kurt) have known each other for their entire lives, but they're not romantically interested in each other AT ALL. And they stay that way! Their friendship does present some difficulties for Isla and Josh, but not because someone's a Duckie or a Watts.

Anyone who's read Stephanie Perkins' previous books knows that the locations are practically characters themselves. Isla adds two new cities to the roster, including Isla and Josh's hometown of New York City, to go along with the series' return to Paris.

Speaking of going full circle: SOAP! We're back at the acronymically delightful School of America in Paris, with its minimal adult supervision and stellar cafeteria food.

Honestly? Isla actually looks like a teenage Stephanie Perkins to me. Since I couldn't think of someone who perfectly fits the bill, I cycled through a lot of (often Canadian) redheaded actress and dark-haired actor combos...

...before deciding on these two.

Relationship Status: Mandy and the Happily Ever After

Isla and the Happily Ever After will be available on August 14th.