We Didn’t Start The Fire 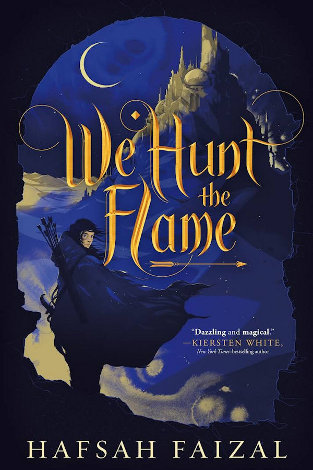 This illustrated cover is so pretty. It’s moody and magical. You know the illustrator read the novel because there are so many little callbacks to the story (Zafira’s cloak, the arrow, the minarets, the sweeping sands). Brava.

It was almost a century ago when all the magic in Arawiya died with the Six Sisters. They went out to the Sharr, a magical prison-island, and never came back. In their place, the Arz—a shadowy forest with the ability to make a man go insane—and the evil of the once-decent sultan grew. Zafira is one of the rare few who can traverse the Arz and make it out alive, so she uses her knack for hunting to feed her poor village, earning herself the moniker “The Hunter” and notoriety she doesn’t exactly want.

On the morning of her best friend’s wedding, while coming back from a hunt, Zafira runs into the mysterious Silver Witch and gets an invitation she can’t refuse: travel to the Sharr and find the Jawarat to bring magic back to their cursed lands.

But what she doesn’t know is Nasir, Arawiya’s crown prince and resident assassin, was also ordered to the Sharr by his father. And the next person on his kill list? The Hunter…

Zafira is obviously a good egg, as she braves danger every day to hunt inside the twisted forest to feed her entire village, even if she has to pretend to be a man to do so. Even after the Arz took her Baba and spit him back out stark-raving mad. She is Katniss-levels of amazing with a bow and arrow, and similarly emotionally closed off except around her sister, Lana, and her best friend, Yasmine. She suffered a bit from Chosen One syndrome, but I think we’d get along well enough as friends.

Nasir, on the other hand, has buried his compassion so far under his cold assassin surface, having had to live under the yolk of a brutal tyrant, that it was hard to connect with him. I wanted him to be stronger, to stand up and think for himself…but at the same time God knows I’ve never had to live with that kind of pressure, so I suppose he needed time to—in the immortal words of Taylor Swift—shake it off.

Zafira’s best friend’s brother, Deen, has been in love with her all their lives. She cares for him, but…love? How can she possibly feel such a thing in such a harsh world? Things happen with Zafira’s other potential love interest that made me kind of side-eye the whole endeavor (sorry for the vagueness, but: spoilers), and coupling that with the story’s slow start (see below), I couldn’t get worked up about the romance in this novel.

On top of all that, was anyone else getting vibes from Zafira and Yasmine like I was? I understood that Zafira was supposed to have a sort of possessiveness and sadness that her friend was now a WIFE and no longer simply her friend, but it was such intense jealousy that it had me pondering that ‘ship for a hot minute.

Talky Talk: In Need Of A Trim

Let’s start off with the good: points to Faizal for incorporating the Arabic style, words/phrases, and sense of place and really making it shine and work for her fantasy setting. I felt immersed in the world of Zafira and Nasir. At times, her turn of phrase was quite poetic and lovely, too.

But We Hunt the Flame desperately needed trimming. I couldn’t help but find myself comparing it another recently released #OwnVoices fantasy when I realized we were a quarter way in, more than a hundred pages, and only just NOW starting on our quest. I am all for characters needing backstory and a home to miss, but even throughout the remainder of the 480-odd pages, there was simply too much filler. Despite skimming through some chapters I was still able to follow the major plot points. I also went back and forth on the prose—there would be sections I’d enjoy and then others I would struggle through, my eyes skipping on strange sentence structures that kept me aware I was reading instead of helping me fall into the story.

There was much to like, but I never fell in love. I think with time to refine her skill Faizal will get there, but I don’t know if there was enough to keep me waiting with bated breath for the final book of this duology.

We get quite an attractive map at the beginning of the book, and the world-building was decent enough that I would’ve have enjoyed more of a taste of what the other caliphs were like (though I am hopeful that will happen in the second book).

There is plenty the characters are keeping from each other at the start of the story, and there were some interesting and shocking reveals that I wasn’t anticipating as time went on.

Our time together started off with promise, Book, and I really thought this was going somewhere. But after multiple dates, I just don’t feel the spark of passion between us. And without a fire, how will we ever take our relationship to the next level?

We Hunt the Flame is available May 14.