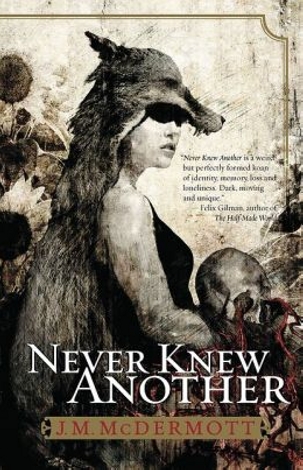 I see what I see of the city, by the grace of the goddess Erin, who granted me the lost memories of the demon child’s skull that I might root out the evil of the world.

I recently wrote about trilogy endings and how saying goodbye to a favorite series is both sad and exciting. I found myself revisiting that bittersweet moment recently when I read We Leave Together by J.M. McDermott, the final book in the excellent, and sadly under-read, Dogsland Trilogy (Never Knew Another, When We Were Executioners, We Leave Together). It’s a trilogy I wish had gotten more attention from fellow SFF readers because it is so good: It succeeds in what it sets out to do, it’s grim but it engages with its grimness in a thoughtful way and the prose itself is enough to recommend the book on its own.

It starts as an unnamed narrator and her husband, both Walkers and shapeshifter priests of the Goddess Erin, come across a dead man’s body, a demon-child, a soldier named Jona. As a priestess of Erin, the narrator is able to, upon touching his skull, absorb Jona’s memories. It’s through those memories, which the narrator writes down, that the labyrinthine life of Dogsland and its inhabitants come to life. She follows on Jona’s footsteps to perform their mission: to completely eradicate—through the powers of fire and death—all the signs that he was ever alive and to find and vanquish the other demon-children living in Dogsland: Jona’s lover Rachel and his enemy Salvatore. Demon-children are a danger to others—inherently evil. Single drops of their bodily fluids are deadly poisonous.

As the narrator traverses Dogsland and goes deep into Jona’s mind (and eventually also into his lover’s Rachel’s memories), the sights and smells of this city come to life and the nature of demon-children are examined. The more the story progresses, the more we come to understand the intricacy of this tale, the complexity of questions about nature and nurture which often go over the head of the narrator herself (for she is a fanatical blunt instrument) but which are inescapable to the reader.

We will kill him, and fight the stain of demons in this city. We are not executioners. We are healers, now, in a fire and revolution and the reaping of the weeds, to cull the weakness in the streets of men. The streets will burn with fire before we are done here.

This is a story about a city where the corruption and decadence of the rich exist alongside the paucity and desperation of the poor. Where addiction to demon weed is ubiquitous and very little hope exist that things will ever change. Where there is a Day King and a Night King and they both have power but the Night King (a woman, actually) wants more. To Jona, Dogsland is everything he has ever known, where his family has lived for always, a place he both loves and hates. To Rachel, it is a place where she found succour, love and damnation. She came to Dogsland to start anew with her brother and it’s also where she fell in love. It’s where her brother became addicted to a drug that is ruining their lives and putting them both in danger. She must leave, but she can only leave if her brother leaves with her (“We leave together”).

It’s a story about two people, Jona and Rachel, demon-children who, before meeting each other, never knew another like themselves. It’s about the fact that they never asked to be born like they are, who continuously question their own nature. Jona never sleeps; Rachel has never had a moment of grace, her body covered in scales. When they cry, their tears burn through cloth and skin and so they keep everything bottled up, always. Both have lived in hiding all their lives, fearing their own nature: Are they really evil? Can they ever be good? If they perform corrupt acts, is it because they were born like this or because they have chosen to act this way?

As you can tell, this trilogy is not

exactly all about ponies and rainbows. It’s extremely grim but one that fully engages with its own griminess and asks questions of it: how to change the state of things? Is the corruption to be accepted because it’s the way things are? Is a small act of corruption enough to condemn a person? These are not easy questions, and the more we get to know (and care for) the characters (or at least some of them), the more complicated it gets.

We are not executioners. We are healers, now, in a fire and revolution and the reaping of the weeds, to cull the weakness in the streets of men. The streets will burn with fire before we are done here.

Throughout Books 1 and 2, it was really hard to predict how all the pieces of this puzzle would fit together. But by the time I finished We Leave Together, everything did come together beautifully. Finding out the exact circumstances of Jona’s death and what happened to Rachel (YES! Rachel! You go, girl!) just about broke my heart in the best possible way.

In Book Smugglerish: 8 out of 10 for the trilogy as a whole.