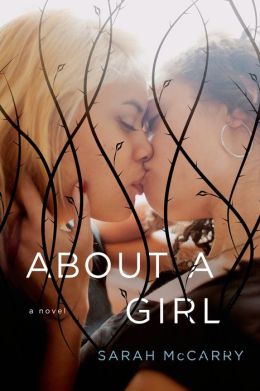 Half of the year is gone (how is half of the year gone?), July is just around the corner (how is July just around the corner?) and now we start the slow build up to the Big Releases of 2015. At The Book Smugglers HQ we fondly refer to August and September as the Months of Doom, because there are SO MANY awesome books coming out then. So without further ado, here are (some of) the books I can’t wait to get my hands on.

About a Girl by Sarah McCarry. Out in July, this is the third and final book in the fantastical, mythological Metamorphosis series. I wrote about Sarah McCarry’s fierce and multifaceted girls and I can’t wait to learn everything about her new protagonist Tally and her journey.

The Fifth Season by N

.K. Jemisin. Jemisin is one my favorite writers of epic fantasy and this is the start of a new series. With a tantalizing cover copy that starts with “This is the way the world ends. Again,” The Fifth Season has what it looks like multiple post-apocalypse scenarios and it sounds bloody amazing. Out in August.

The Accident Season by Moïra Fowley-Doyle. Also out in August, an ARC of The Accident Season landed on my desk unannounced a few months ago and the premise has been lingering at the back of my mind ever since: every October, Cara’s family becomes inexplicably prone to accidents. Is it a curse? Something else? Death, fear and obsession ensue. I can’t wait to read this.

Court of Fives by Kate Elliott. Another August release, this one is Kate Elliott’s YA debut. It’s the beginning of an epic story, the type Kate Elliott is amazing at developing. Her worldbuilding is always phenomenal and I can’t wait to read this one as well as her other release later in the year (November), The

ALSO in August, The House of Shattering Wings by award-wining author Aliette de Bodard. It looks like it’s an epic murder mystery set in a post-apocalyptic Paris where different Houses vie for power in the fall-out of a war in Heaven. I mean…shut up and take my money, right?

The Scorpion Rules by Erin Bow. A September release, The Scorpion Rules is Erin Bow’s new book and it seems to be a departure from her usually dark but gentle fantasy novels. The Scorpion Rules is a set in a post-climate world ravaged by war between nations in which peace is kept by exchanging hostages with two main characters who in theory should be ready and willing to die for their countries.

One of my top 10 books from last year was the unexpectedly incredible (and under-read) A Creature of Moonlight by Rebecca Hahn. When I heard the author had a new book coming out in September, I might have snoopy danced. Then, I saw that The Shadow Behind the Stars features the three Fates of Greek mythology and September can’t come soon enough.

entine is Cindy Pon’s new fantasy inspired by Chinese mythology and set in the ancient Kingdom of Xia. It sounds like it’s coming-of-age, romance and fantasy all rolled into one as a young woman comes to terms with her sense of self.

Finally, we have the debut novel Sorcerer to the Crown by Zen Cho (you guessed it, out in September). I love this author’s short stories and novellas (seriously, check out the delightful The Perilous Life of Jade Yeo) and I can’t wait to see how this novel turns out. It’s sorcery-meets-Britishness and there is something called The Royal Society of Unnatural Philosophers and it sounds like it’s right up my alley.

I shall devour all of these as soon as possible, thank you very much.