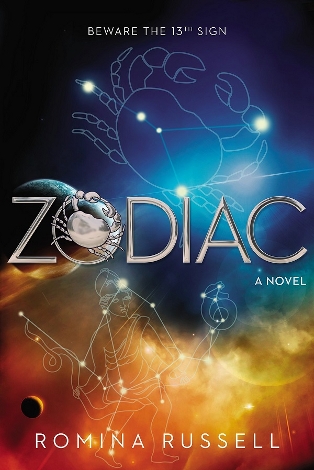 This reminds me of the artwork for many a scientific docu-series: neat to look at, but not quite capturing the full scope and awe of its subject. At first glance, I had mistaken the bottom constellation for Virgo, but it actually being Ophiuchus makes more sense and has also dashed my hopes of making an immature remark about crabs and virgins.

The 12 Houses of the Zodiac galaxy have always kept to themselves. But that all changes after a freak incident strikes House Cancer, and 16-year-old Rho Grace is elevated to the highest position within the House. Rho's star-reading abilities leads her to believe that Ophiuchus, the ancient legend of the 13th Zodiac Guardian, is behind the catastrophe—and he's not done yet. In order to prevent further devastation, Rho must travel to the far reaches of the Zodiac to warn the other Houses. But who will even believe her warnings about a cosmic boogeyman?

Seeing as it could be a subtle nod to the Bayer designation for star nomenclature, I'll give Rho the benefit of the doubt when it comes to her unique name. But I can't really make excuses for my indifference to being her BFF. Like, I get that her responsibilities are serious shizz, but Rho's life seems to be way too heavy for me to picture us to be besties. Sorry, girl; you're shaping up to be a decent leader, but you wouldn't be my first call for a fun hangout.

Cue the love triangle sad trombone, 'cause there be two love interests. Mathias Thais, whose full name reads like a sexy stutter, is Rho's serious and straight-laced mentor—and long-time crush, natch. His polar opposite, as all love triangle combatants must be, is Hysan Dax, an easy-going and mischievous delegate from another constellation, whose habit of referring to Rho as "my lady" has a rather unfortunate connotation.

Aside from my own weird hang-ups, these dudes just didn't do it for me on an emotional level. The relationships sometimes even felt forced. Plus, there's a forbidden aspect that ends up being all but forgotten, even though it's introduced as a BFD. Although I will applaud Rho being in control of her sexuality (and safely, too).

Y'all, there is A LOT of worldbuilding to take in here. As someone who comes across more misses than hits with that sort of thing, I'm sad to say that the deets and the occasional info dump overwhelmed me here as well.

On the flip side, the science-y stuff left me a little underwhelmed. (After all, I could only be whelmed in Europe.) Sure, there are hyperspeed spacecrafts and presumably long-since terraformed and colonized planets. But Tasers haven't gone out of style in the centuries since Veronica Mars, and telecommunication has been replaced by a network that relies on Psynergy, which taps into an individual's psychic energy. In other words, hard sci-fi this ain't. Deffo more like a fantasy in a sci-fi setting.

This series' elaborate mythology connects the Western zodiacal signs with their corresponding constellations. It's a source of inspiration that thankfully hasn't been driven to the ground (yet).

This book also takes its astrology to the extreme: The people of each House have similar personalities. Except unlike other examples we've seen before, in which there's at least somewhat of a choice, everyone in the galaxy is just born into the traits of their House. Maybe there'll be an explanation for this later on, but there isn't one in the first installment.

Well, he's already used to playing a love interest for an under-aged girl.

Early on in our date, I had suspected that this book and I wouldn't work out. Its brand of pseudoscience was an instant red flag of our incompatibility. But because I'm not a total jerk (and, more importantly, I hadn't arranged a bail-out call beforehand), I stayed on the date anyway. It's all about keeping an open mind, right? And either way, it's only a few hours of my life; how bad could it be?

But the sparks, they did not materialize. I admire this book for shooting for the stars, but I just won't be joining it for another round.