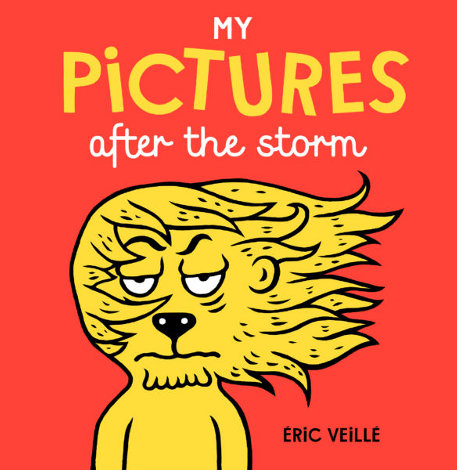 As I’ve said many times here at Kirkus, I love to follow picture book imports, and one thing I appreciate about them is the amount of chaos they’re willing to let in. If you live in America and primarily write about picture books from this country, as I do, along comes an import, and it’s often an altogether different beast. And a breath of fresh air. (To be sure, it’s not that American picture books don’t get bonkers. Jason Carter Eaton’s newest picture book is but one example of that. There’s over-the-top chaos and misrule PLUS an infestation of barbarians, of all the things.)

Today, I’ve got two chaos-filled French imports on the mind. My Pictures After the Storm, written and illustrated by Éric Veillé, was originally published in 2014. And Gilles Bachelet’s Mrs. White Rabbit was originally published two years earlier. Both have been translated into English—Bachelet’s was released earlier this month, and Veillé’s is due to hit US shelves next week.

As the Kirkus review notes, My Pictures After the Storm may be board-book shaped and have a thick, board book-like cover, but it’s not your standard board book fare. (And, to be clear, it doesn’t have thick, board book pages anyway.) This one is wonderfully bizarre; Éric Veillé was the same author who brought readers 2015’s offbeat The Bureau of Misplaced Dads (though he didn’t illustrate that one). My Pictures After the Storm is the ultimate before-after book, and it’s terrifically smart and funny.

Each spread depicts a series of small images on the left. On the right, we see some sort of after-version of the same images, but it’s the cause of the “after” that changes each time. The titular first spread shows items and people you might see on a beach – a pail, a parasol, a slide, a boy on a ship (with, it should be noted, a towel wrapped around his legs), a swimming master, and an ice cream cone. On the right, “My Pictures After the Storm,” we see an overturned pail (the “pail” label becomes “puddle”); a slide that has been knocked on its side (with the world “slide” upside down); a parasol flung so far that it can barely be seen on the page; the boy on the ship, now towel-less and covering himself between the legs (“boy on a ship” becomes “boy in the nip”); and the swimming master with the boy’s towel covering his head (that storm must have really kicked up some winds), turning him from “swimming master” into “towel disaster.” And that “ice cream cone,” which a little boy was holding and eyeing hungrily? It’s now splattered on the ground and is “ice cream gone!”

You get the idea. There’s a lot of tragi-comic humor here for these poor beach-goers – and nearly everyone else. The next spread surprises you with “my pictures after the elephant.” (A pear becomes “sweet pear jam” in the wake of an elephant’s march.) Mind you, readers never see what comes between order and destruction. Wisely, Veillé leaves that to children’s imaginations. There are pictures after: lunch, a swim, a cannonball into the water; the hairdresser; a practical joke; the battle between two boys dressed as an outlaw and a knight (probably the most chaotic of all); too many potato chips; a cold; and more.  The cleverest shows “my pictures after correction,” where nearly everything on the left side of the spread had been incorrectly labeled; the most imaginative involves a magician who turns, for one thing, a “teacher berating” into a “teacher inflating”; the most spectacularly sinister shows what happens “after the night” (keep your eye on the cat!); and the most laugh-out loud spread for grown-ups shows “my pictures after the baby” arrives (a shocked big brother and screaming little sister in the center). The best part may be that on the left side of the spread we see smiling parents, yet they aren’t even pictured on the right. Ah, such is early parenthood.

Young children are often asked in the early grades to think about cause and effect, the relationship between an action and its outcome. They delight in the more surprising ones, and that’s what we have here in Veillé’s book. Every kindergarten classroom needs a copy for children to pick up and browse. There’s a lot to enjoy. Expect many laughs.

Another more traditional kind of chaos comes in the form of a tired housewife, though rabbit in form, in Gilles Bachelet’s Mrs. White Rabbit. In this book, very much a tribute to the world of Lewis Carroll’s Alice’s Adventures in Wonderland, chaos reigns in Mrs. Rabbit’s world, as noted in her diary and with no thanks to her clueless rabbit husband.

One thing I’ve been spying with my little eye lately is how mothers are depicted in picture books of late, which is, I suppose, another column for another day. In the aforementioned (or at least afore-linked) Great, Now We’ve Got Barbarians!, written by Jason Carter Eaton and illustrated by Mark Fearing, it’s the mother who seems to be in charge of the housework. How often do we, still today, see them tidying, straightening the home, fussing at their children about cleaning up their rooms? A lot. This French book takes it to an extreme. Why the beleaguered Mrs. Rabbit puts up with it for so long—I want to pull her aside and tell her in my best aw-snap-girl tone that she shouldn’t settle for less—is beyond me. But she does.

She gripes in her diary about how her husband goes to work late, never notices anything, works overtime (sometimes with liquor in hand), and doesn’t help with the housework. To boot, her oldest daughter has issues with her body image, spending all her time on a scale and refusing to eat; her other children are a handful; the Cheshire-like cat makes her crazy; some young girl, who keeps changing sizes, disrupts the home (Alice, no doubt); and the small town gossips about Mrs. Rabbit. When her husband finds her diary, in which she notes how she would have loved to have been a writer, instead of living her “dull everyday life,” and how it’s her birthday, he manages to bake a cake. It’s a bit of a disaster, as the rest of her life seems to be, but he smiles valiantly anyway on the final page.

Poor Mrs. White Rabbit. She’s backed into a corner, and life is grim. She scowls on nearly every spread, save the one where she envisions him actually helping with the housework. Will the cake make her smile? Will it be the ray of hope she needs? Will having seen her diary change her husband’s ways? Bachelet leaves that a mystery for readers.

Bachelet’s illustrations are one of a kind and feature fluid lines, lots of drama, tons of detail, and many nods to Alice fans. When I say this is detailed artwork, I’m not kidding: There’s an unforgettable spread depicting “100 Ways to Cook Carrots.”

And lot of chaos. These two French author-illustrators anyway aren’t afraid of a bit of destruction, showing us how life’s storms, in more ways than one, change us over time.