When Death Shows Its Heart 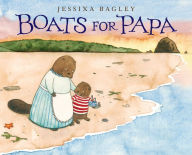 In her early January piece for School Library Journal, “What’s Trending? What Is, What Was, What’s Soon to Be in Kid Lit,” Betsy Bird attempted, in part, to look into a crystal ball and predict what 2016 trends in picture books would be. She wrote that “the most serious trend consists of the very serious topic of talking to children about death and bereavement.” As for 2015 picture books, she cites the popular and critically acclaimed Boats for Papa, written and illustrated by Jessixa Bagley, as perhaps “the most prominent picture book on love and loss.” (It’s mighty observant for her to describe it as a book about “love and loss,” since Bagley never specifies that the protagonist’s papa died. Strictly speaking, he could be away for any number of reasons, though many readers assume he’s died.) There was also Phoebe Wahl’s excellent Sonya’s Chickens, what the Kirkus reviewer called “a reassuring story about death in the natural world.”

On the whole, picture books originally published overseas face death, and other life challenges, head on. We simply see more imports that address death for young readers, as well as ones that are willing to let the hard questions about death and life after death remain unanswered. (We Americans, it seems, like more closure to our stories.) I wrote about this in an essay for last year’s The Newbery & Caldecott Awards: A Guide to the Medal and Honor Books, 2015 Edition, published by the American Library Association.

Case in point: coming in March is Glenn Ringtved’s Cry, Heart, But Never Break, illustrated b

y Charlotte Pardi and originally published in Denmark in 2001. The book’s first spread notes that four children live with their grandmother in a “small snug house.” Their grandmother is kind and has taken care of them for many years. “Now she had a visitor,” the text notes. In the illustration, we see a scythe, much like the Grim Reaper would carry, leaning against the house right by the front door.

The visitor—a tall figure, cloaked in black—leaves the scythe by the front door so as to avoid scaring the children, but they know it is Death. The youngest child stares straight at Death, in fact, while the rest of the children hang their heads in sorrow, for they know Death has come for their grandmother. Even Death is hunched over at the kitchen table, as if feeling guilty for its presence. Ringtved even writes: “Some people say Death’s heart is as dead and black as a piece of coal, but that is not true. Beneath his inky cloak, Death’s heart is as red as the most beautiful sunset and beats with a great love of life.” Death goes on to tell the children a story about Joy and Delight, Sorrow and Grief, and asks them, “What would life be worth if there were no death? Who would enjoy the sun if it never rained? Who would yearn for day if there were no night?”

It’s a remarkable story and respects the fact that children can handle death in ways we don’t often give them credit for.

However, Betsy may be on to something, bec

ause here in the U.S. we’ll also see this March a new edition of Margaret Wise Brown’s The Dead Bird. This was originally published in 1958 (though, evidently, Brown wrote it 20 years earlier) and illustrated by Remy Charlip. Christian Robinson gives it new life (bad pun not intended) in this wonderful 2016 version. While Charlip gave readers a white bird with blue wings and a horizontally oriented book, Robinson brings us a fallen brown bird and a more vertically oriented book, occasionally showing off the city behind the park where the children play. The 1958 version has text and art alternating on each spread. Robinson lets text and art share the same spaces, and instead of all white children as in the ’58 version, Robinson brings readers dark- and light-skinned children playing together.

“The bird was dead when the children found it.” That’s how the story opens, and it’s all about their fascination over and sorrow for the bird—and their decision to bury it and give it a proper send-off. In both versions, one of the children has a kite. Charlip’s more solemn illustrations tell an unspoken story of blame placed, as we see a boy scolding another boy (the one holding the kite), while he points at the dead bird, as if accusing him of having felled it with his kite. No such accusations occur in Robinson’s version; he brings a bit more whimsy (but never a cloying whimsy) to the tale. (One child has a fox mask, and another has fairy wings. Clearly, they’d been involved in imaginative play before spotting the bird.)

What I love about this story is the way Brown captures how curious children are about death. These children are sorry the bird is dead but happy they found it so that they could dig its grave. In the new edition, they even have slight smiles on their faces, as if at peace with the bird’s demise. They visit the bird daily to sing to it and put fresh flowers on its grave—every day, that is, “until they forgot.” I love this detail. Life goes on for these children, as it must.

In February, we’ll also see Caron Levis’ Ida, Always, illustrated by Charles Santoso, another story about coming to terms with death. Inspired by the true story of the Central Park Zoo polar bears Ida and Gus, Levis captures grief well with lines like “There were growling days and laughing days and days that mixed them up.” Emily Arnold McCully’s Clara: The (Mostly) True Story of the Rhinoceros who Dazzled Kings, Inspired Artists, and Won the Hearts of Everyone…While She Ate Her Way Up and Down a Continent!, coming in June, tells the true story of the 18th-century rhino who toured Europe at the hands of a Dutch sea captain named Captain van der Meer back “when half the world was still a mystery to the other half.” The book closes with Clara’s death, as Captain van der Meer soothes her. “For a moment, Clara seemed to be remembering it all. And then she shut her eyes.” The end. It’s a striking and moving close to a fascinating story.

Will 2016 bring us other American picture book titles about death and bereavement? Only time will tell.