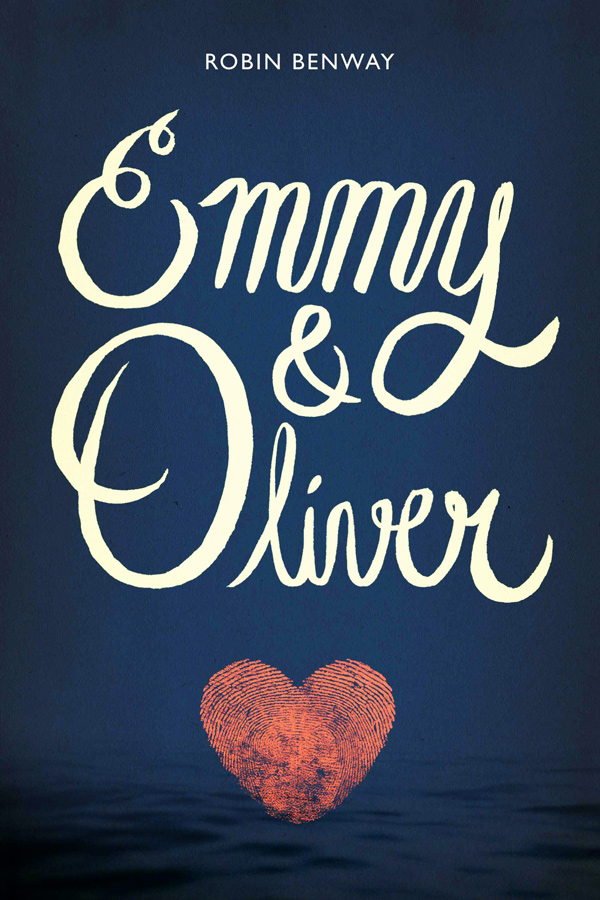 The typeface on this cover looks like it came straight out of a hipster shop on Etsy, and I mean that in a good way. Sure, the thumbprint heart is a bit twee, but since a fingerprint plays a pretty significant role in the story, I'll allow it. This cover is sweet, it's simple, and it doesn't feature any PDA, so let's consider it a big win in the ongoing battle for better YA artwork.

There's something incredibly special about a childhood bestie. When you're a kid, the criteria for friendship isn't based on race or class, it's about a willingness to share toys and buy into a mutual world of imagination. That connection is pure and uncomplicated, but it's also ephemeral in nature, and the friendship often fades or falls apart as adolescence approaches. For most of us, our first best friend is someone who occasionally crosses our Facebook newsfeed and then disappears back into the dusty corner of our memory. But for Emmy, it's a whole different kind of disappearance.

She lost her best friend Oliver, not because of the passage of time or the onset of diverging interests, but because he was kidnapped by his father in second grade and never heard from again. Until, 10 years later, he resurfaces.

Now he's back, living next door to Emmy in his old house, a ghost from the past and a stranger in the present. Emmy aches to know him again, but striking up a friendship is no longer as easy as offering him her toy, especially since Oliver barely even remembers her.

In some ways, Emmy reminds me of myself as a teen—she's a good girl who loves her parents and friends, and she lands somewhere in the middle of the high school food chain. But in other ways, we couldn't be more different, and by that I mean, she's a total badass. She surfs, and even cooler, she keeps it from her parents, who, ever since Oliver disappeared, have always been two panic attacks away from tossing her into a bubble. She's funny yet thoughtful, confident yet cautious, and I really enjoyed hanging out in her head.

Honorable mention goes to Emmy's actual best friends, Caroline (sassy as all get out) and Drew (charming as all get out). I would so party with them.

Oliver is a classic MLD (Mysterious Loner Dude), with an emphasis on the "M" thanks to the 10 years he spent living with his father under the radar. His past with Emmy forms a fertile foundation for romantic tension, and it doesn't take long for her to revive their old connection and then slowly transform it into something richer, deeper...and sexier. Their undeniable chemistry simmers at a slow burn while infusing all of their interactions with a poignancy that will send the butterflies in your stomach soaring.

Talky Talk: Graduate of the School of Sarah Dessen

Robin Benway deftly weaves some serious themes through Emmy's narrative without ever weighing it down. In the vein of HRH Sarah Dessen, this is a book that feels like a beach read, even as it covers some heavy ground, and Benway's dynamic characters exist in a world that's as easy to sink into as your favorite chair. The dialogue is uncannily good, a lively dance of words that kicks incredible life into the pages. Take, for example, this exchange between Oliver, fearful of sharks during his first surfing lesson, and Emmy, who uses Point Break as a teaching tool (as one should):

"If Patrick Swayze saw a shark, what do you think he would have done?"

"I also didn't foresee this surf lesson involving that question."

"Patrick Swayze would punch that shark in the nose," I answered for him. "And that's what I will do for you, okay?"

"For me?" He put his hand on his chest and pretended to be flattered.

"I told you, I'm a loyal friend. Kicking therapists, punching sharks, whatever it takes."

It only took a few hours for me to devour this book, but by the end, I felt like I had known its inhabitants for years. And I can't wait to visit them again.

In Sara Zarr's Sweethearts, Cameron Quick is a boy from the main character's childhood who reappears in her life after years of radio silence. He's an MLD on steroids, and he's one of the hottest guys in YA history. Although Benway's novel tells a very different kind of story, it's impossible not to see shades of Cameron in Oliver, which obviously makes him that much more swoon-worthy.

Emmy's secret life on the waves is an important outlet for her, and it also doubles as a great excuse to spend time with Oliver.

I fell hard and fast for this book, but it's not just a fleeting infatuation—my feelings stem from a place of both passion and respect. Emmy & Oliver moved me with its themes, enchanted me with its characters and tickled me with its delightful sense of humor, and I'll cherish it like a childhood keepsake.