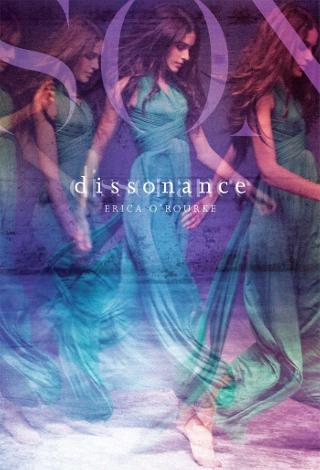 Long time, no see, Fancy Dress. Looks like you're up to your usual tricks, enveloping characters that have no business sporting formal wear. The multiple versions of the model do tie in to the story, but given that the heroine's idea of getting gussied up is slipping on a vintage sweater, this flowing gown MAKES NO SENSE. Fancy Dress, you really need to learn how to keep it casual.

Delancey Sullivan is surrounded by What Ifs. Like, literally. She's a Walker, which means she can visit all of the parallel worlds that spring from people's decisions in the real world, known as the Key World. If you decide you want to have a bagel instead of toast, she can slip into the world where you had toast, a place where that one breakfast choice changed your entire life. Before I start to sound like a commercial for Special K, I'll let her explain how it works:

Once a decision is made, a branch—the choice you didn't take, an alternate pathway, an alternate world—is created. Most of the time, it's no big deal. The alternate world, populated by Echoes, goes its own way. It creates Echoes of its own and never interferes with the Key World again.

Every once in a while, for reasons unknown, something goes wrong. There's a snag in the fabric of reality, a frequency that's grown too strong or too unstable. Left alone, it will spread, devastating the Key World and weakening the other branches of the multiverse. And that's where Walkers come in—crossing through pivots, cutting off one reality to preserve the rest. Cleaving.

Like the rest of her family, Del is responsible for maintaining the integrity of the Key World. But unlike the rest of her family, Del isn't great about following the rules, and when Simon, her unrequited crush from school, starts showing up as an Echo in several different worlds, Del can't stop herself from interacting with him. Meanwhile, strange, chaotic things are happening throughout the multiverse, and when the instability reaches the Key World, Del truly begins to understand the meaning of consequences.

Look, I get it. Del is a teenager. She's passionate and hormonal and reckless, and that's allowed, given her age (and the fact that Simon is megahot). But that doesn't mean that I have to be happy about it. I wish I had kept a tally of how many times I shook my head and thought, "Bad idea, Del!" because then I could've used that tally to create a drinking game, and I'd have a nice little buzz going on right now instead of a headache from all of the TERRIBLE CHOICES. Not only did she stress me out with her impulsiveness, she also drove me crazy with her serious mismanagement of the Boy Department. She spends the whole book purposefully ignoring the fact that her best friend, Elliot, is in love with her (say it with me now, "Bad idea, Del!"), and then when Key World Simon finally shows some interest, her insecurity takes over and sends her flying into a fit of jealousy.

Y'all, I'm just too old for this shizz.

As a star basketball player and school stud, Simon is certainly attractive. He's unattainable to the plebeian Del, so I understand the temptation to get close to his Echoes. What I don't understand is the insta-love that happens with one of the Echoes, especially given the fact that Del's crush on Key World Simon is as poorly fleshed out as his character. He's got the trappings of a great love interest—smokin' good looks, charming swagger, tragic backstory—without the substance to actually inspire love. Del's connection with him felt flat, and even a heavy make-out sesh failed to elicit any sparks.

Unlike the story itself, I'll get right to the point. This book is way too long. Its premise is complex, and I understand the need to set it up carefully, but even after 200 pages, I still didn't quite grasp all of the Walker concepts, nor did I have the patience to try. More importantly, the plot meanders at an unnecessarily slow pace until the last 50 pages, when it sprints toward the finish line. And by that point, the reader has waded through so many hints and clues that the only thing shocking about the Big Reveal is how freaking long it took Del to figure it out.

It's fascinating to consider a multiverse where different versions of yourself are living incredibly disparate lives. Del and her sister, Addie, walk through hundreds of worlds:

Unfortunately, we don't get to see any of those worlds, because Erica O'Rourke is a tease. Still, it makes for a fun concept in this book.

Del's grandfather, Monty, is not quite right in the head after a life of Walking, not to mention the disappearance of his wife. But his off-kilter personality makes him a wonderfully nutty grandparent, and his streak of mischief makes him a fantastic partner in crime for Del.

Relationship Status: The Date That Took Me To a Cool Restaurant Then Talked My Ear Off

I was really looking forward to my time with this book, because the setting for our date was really intriguing. But I never even got a chance to enjoy the whole multiverse thing because this book just wouldn't stop talking. So many words! With all of the conversation, I kept hoping we would at least discuss something substantial, but by the time this book got to the point, I was like, "CHECK PLEASE."