When War Takes a Holiday 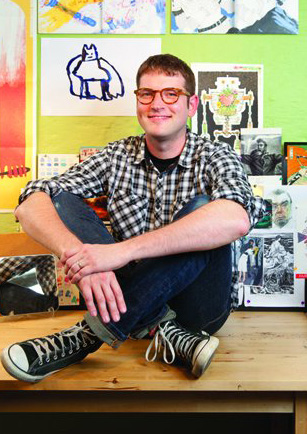 It was 100 years ago today that a remarkable act of humanity occurred in the least likely of places, and author-illustrator John Hendrix captures it in his newest picture book, Shooting at the Stars: The Christmas Truce of 1914. I asked John via email when it was that he first heard this moving true tale. “I was about age 14-15,” he tells me, “in a Christmas day sermon at my childhood church. I was reading All Quiet on the Western Front that year, so the imagery of World War I really got stuck in my heart. I have always wanted to make a book about this story. It is such a good story that it is almost impossible to screw it up.”

nd we see a soldier named Charlie hunkered down in a cold trench. In one striking spread, Hendrix brings us a close-up of a letter the soldier is writing to his mother—“Life in this foul pit is very trying. Was I really finishing school only a few months ago?”—and a map of the trench where he sits. It shows the No Man’s Land (about 30 paces) in between, and across the way, the German line, which the English soldier and his comrades have dubbed “Fritz.”

The boy’s letter continues, as he describes the harsh conditions of war. “It is very cold today, and clearly our hopes of the war ending by Christmas have faded.” But with great excitement, he recounts for his mother “a tale so wonderful that you will hardly believe my account!” Thus begins his story of the great and improbable truce, how on Christmas Eve the English soldiers were startled to hear the German enemy across No Man’s Land singing “Silent Night.” The Germans had even set up Christmas trees lit with lanterns and candles.

The next morning, something even more surprising occurred: “Hallo? English soldiers….Where are your Christmas trees?” they heard bellowed from the German line, followed by loud laughter from their trench. Eventually, Lieutenant Lovell of the English side walked right out past barbed wire to meet a German officer. They shook hands, and “war had taken a holiday.” All the soldiers met in the middle, and they buried their fellow soldiers who had been killed in the line of fire. “I can hardly describe to you what it was like here,” the soldier tells his mother in the letter. “We were talking with men we were trying to kill just the day before!” A few soldiers took photos, and one of them is included in the back matter of John’s riveting book.

And then there is this stunning spread, the one closing the story:

When I tell John how much I love it and ask him if he wants to discuss it, he tells me that it’s the book’s most vital piece. “Funny you pick that one out,” he says. “The book basically started with this image. The whole book, in a way, was written to justify making this drawing. I just love the almost childlike innocence that Charlie offers in this page. I chose to make Charlie as young as possible so that the child readers could identify with him as much as possible, but I think this page is when the soldiers look the most boylike—as if they had just spotted a friend across the playground. In my mind, it was a cleaner way to end the story with some emotional resonance, instead of just staying inside the letter-writing the whole time.”

For research, John read extensively, including “the two books that are the most authoritative on the events of that day. It wasn't just one single moment, but a spontaneous truce happened along about 30 miles of the front lines. So, this story is a blended version of several different accounts. The original letters about this event are incredibly powerful. I went to the National World War I Museum and did extensive drawing on and research there as well.”

John’s epistolary take on the narrative is an approach that works. Parts of the text are read via the soldier’s hand-written note, and other parts are laid out in traditional text, but the story is always coming straight from the young man’s letter. “I had experimented with having the whole book handwritten,” he says, “and though it all is inside Charlie's narrative voice, I felt it was better to remind the readers once in a while about his hand-writing the letter and then let it fade just into the story itself.”

War, John tells me, is a tough subject matter to portray visually, even for adults. “But in the case of directing a war book at children, it is even more delicate,” he adds. “I did show some troubling things, but ultimately I think it is grounded in things that kids recognize, like kicking a ball around and singing around a fire and that warm feeling of connecting with someone different than yourself. The dissonance that the soldiers felt in that moment is exactly the same thing that the reader is feeling, [wondering] are these soldiers or boys in the schoolyard? That feeling is essential to putting the reader alongside the characters.”

This, John says, is what makes history come alive. “Getting a kid to say this person who lived a hundred years ago is basically just like me is a wonderful thing to take away from a war story a century ago.”