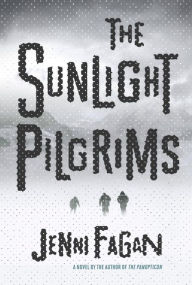 On Ash Lane, along a row of silver bullet caravans, a blackbird lands on a fence post. His eyes reflect a vast mountain range. Standing at the back of no. 9 looking toward the parhelia are Constance Fairbairn, her child Stella and the Incomer. Neighbours step out onto porches and everyone is unusually quiet, nodding to each other instead of saying hello.

Stella imagines the brightest sun is for her, the second is for her mother and the last is for clarity, most recently lost. Her mother wants this back in their lives, but the child does not know why she should want it so much when clarity is no ally. It isn’t any kind of a companion at all. Stella stands, arms folded, frowning – right in between her mother and the Incomer, while three suns climb higher in the sky.

It’s 2020 and a winter like no other before in living memory is brewing: it’s snowing in parts of the world that had never seen snow before, sea level is rising everywhere and causing floods, and an iceberg is making its way down to the Scottish coast. The news from all around the globe is ominous – people fall asleep in the cold to never wake up, roads are closed off due to snowstorms, food is becoming scarce, public services rely more and more on volunteering – indicating an incoming Ice Age. Perhaps even the end of civilization as we know it.

For the small community of Clachan Fells caravan park and its permanent residents, life goes on. Life has to go on – what choice do they have? Constance Fairbairn is a survivalist who works on shabby chic furniture for the rich whilst maintaining an apocalyptic ladder. Constance is hardened by life but lives it on her own terms, two lovers on the go, a no-frills attitude, and a strong sense of right and wrong.

Her daughter Stella is a trans teenager who just started transitioning and whilst worrying about the news coming through the Internet about the world, she also worries about puberty, about how her friends have taken her news, and whether she will get the hormone blockers she needs.

And then there is Dylan, the incomer. Dylan just moved from London where he lived with his beloved mother and grandmother who recently passed away, leaving him alone, destitute and with nothing but a caravan house too small for him and a sketchbook full of secrets.

The narrative moves between Stella and Dylan’s viewpoints, a snapshot of their lives, episode after episode following the characters through a winter where temperatures plummet to minus 50 degrees celsius.

A painfully beautiful story of the apocalypse, it would be easy to dismiss The Sunlight Pilgrims as a novel where “nothing happens” given its episodic nature. That’s only true if you think of life as “nothing”: there is nothing little about this novel, nothing unimportant within its pages. From Stella’s wary yet hopeful outlook, Constance’s unapologetic stance, and Dylan’s big heart, this novel is populated with humane, realistic, lovingly portrayed characters against an increasingly scary backdrop.

Dylan’s grief for the loss of his mother and grandmother is palpable – and it’s been awhile since I’ve felt any sort of connection to a male character but here comes Dylan: a man who loved his previous life, who doesn’t judge Constance or Stella for who they are (he loves them, just as they are), and who is immediately protective of Stella.

Constance though, Constance is awesome. Although Constance doesn’t get a viewpoint of her own, it’s easy to infer who she is through the narrative in Jenni Fagan’s fantastically clever and dexterous writing style. In many ways, the biggest characters in the novel, Constance and Dylan’s mother and grandmother Vivienne and Gunn, are the one who don’t get a viewpoint but who still shine through as larger-than-life characters who are so very sympathetic, knowledgeable, and capable. It is Constance who yields the axe, who fixes things, and who asks the hard questions. It’s easy to see why both Dylan and Stella love her so much, because I fell a bit in love with her as well.

When I reviewed Jenni Fagan’s debut novel The Panopticon, a couple of years ago, I remarked on how I had my heart broken by “the small moments of clarity and of beauty in this story”. I can repeat the same sentiment here, for it is also true when it comes to The Sunlight Pilgrims. It’s amazing how a novel about ice cold environmental catastrophe can be so full of warmth. It’s probably going on my top 10 of the year.

In Booksmugglerish: a cozy 9 out of 10
MORE FEATURES
POPULAR KIRKUS STARS