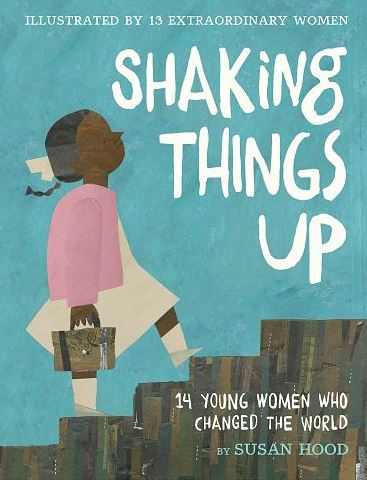 As this Slate article points out, the media has been quite generous in dubbing more than one year “the year of the woman.” But I’m with the Washington Post’s James Hohmann, quoted at the end of that piece, who wrote, “The massive women’s marches on the Saturday after President Trump’s inauguration were a harbinger of bigger things to come.” Could 2018 be the year? Actually, equality in all areas and at all times, instead of giving us just one year, would be lovely.

Nevertheless, I think that’s children’s book publishing of late has been extra eager to highlight women’s stories, particularly in the realm of picture books. Here today I write about three brand-new ones well worth your time.

There’s a lot to like about Deborah Hopkinson’s picture book biography, Ordinary, Extraordinary Jane Austen (releasing towards the end of the month), accompanied by Qin Leng’s eloquent watercolors. The opening sentence is undoubtedly memorable, as all opening sentences should be: “It is a truth universally acknowledged that Jane Austen is one of our greatest writers.” On that same page, Hopkinson immediately engages the reader with a second-person voice, noting that “it might surprise you to know” some things about Jane.

We are introduced to Jane as a regular girl: She’s not rich or famous (and never was in her lifetime). She’s awkward and shy. She’s the quiet one, observing others move in the world. She’s an ardent reader, and she’s already writing at age 12. In fact, she’s writing her first novel as a teen. Her father encourages and supports her talent.

Jerome Bruner once wrote that “trouble is the engine of narrative.” There’s no trouble in Jane’s life story, nothing standing in her way. Although her novels eventually aren’t published with her name on the cover and instead say “by a lady,” the custom of the time, we still read that this didn’t really bother her. She was thrilled to be known as a writer, once the secret was out that she was a published author. There are no terrible tragedies and no family upheavals of any sort. Austen’s happy household as she grew up was, Hopkinson writes, “like growing up inside a story full of fascinating (and noisy) characters.”

Yet, despite Bruner’s wise words, it’s still an absorbing story, and Austen fans will be especially smitten. The two final spreads are particularly splendid, one showing contemporary readers lost in Austen’s books and the final one showing young Jane in a room packed with books. Jane, Hopkinson writes on this final page, knew she could “write about the ordinary world in the most extraordinary way.”

In Libba: The Magnificent Musical Life of Elizabeth Cotten, coming to shelves in mid-January, musician Laura Veirs writes with abundant reverence about the life of the self-taught African American guitarist responsible for “Freight Train,” one of the world’s most iconic folk songs. As a young girl, left-handed Cotten snuck into her brother’s room, picked up his right-handed guitar, turned it upside down to play backwards, and taught herself to play. A chance encounter with Ruth Crawford Seeger of the famous Seeger family led to work in their home. As their housekeeper, she heard the likes of Lead Belly, Woody Guthrie, and Muddy Waters, playing in the home. Once the Seegers heard Cotten play, they spread the word about her talents—and history was made.

Veirs highlights Cotten’s precocious talent and unconventional style of playing—“Libba turned her guitar upside down and backwards so she could play it in her own way”—while using a train metaphor throughout the book. (When Libba, for a time in her middle-age years when she focused on work and family, stopped playing, Veirs writes that “even trains get derailed.”) The graphite illustrations from Tatyana Fazlalizadeh, the artist responsible for the 2013 art series Stop Telling Women to Smile, are soft-focused with muted colors, much like memory. And I won’t forgive you if you don’t take off the dustjacket to see the surprise (and pretty much perfect) cover underneath.

Hood highlights female activists in an impressive array of fields — firefighting (Molly Williams, first known female firefighter in the U.S.), paleontology (Mary Anning, who at age thirteen discovered an ichthyosaur), librarianship (Pura Belpré), journalism (Nellie Bly), undercover operatives (Jacqueline and Eileen Nearne), architecture (Maya Lin), and much more. The first female African American astronaut is here (Mae Jemison), as well as Frances Moore Lappé, food writer and anti-hunger activist: She “keeps Earth’s soil and water clean / … helps the hungry grow more beans … / This is the Earth that Lappé dreamed.” Each poem and illustration is followed by a brief bio of each woman, and the book closes with a list of sources and information for further reading.

“I chose to write this book … to celebrate the world I want for my daughters, my new granddaughter, and the young girls and boys out there,” Hood writes in an author’s note. If I could give her a fist bump for including “and boys” there, I would. And that’s because boys need to see these stories of powerful women just as much as girls do.