Wondering at the Natural World 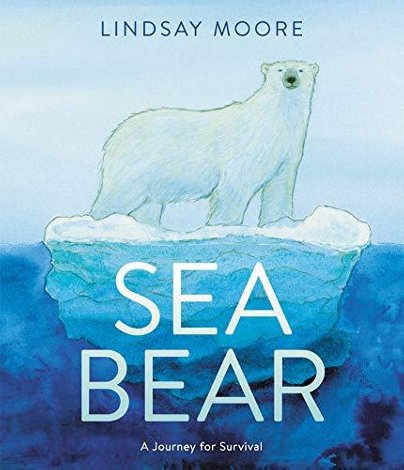 It’s most certainly still winter, but spring is just around the bend. For young children, it’s an exciting time of year. There is so much to wonder about when it comes to spring; the rich and complex natural world is waking up. But there’s a lot in general about the transition from winter to warmer weather, too, that beguiles children. Two new picture books—Lindsay Moore’s Sea Bear: A Journey for Survival and Beth Ferry’s Squirrel’s Family Tree, illustrated by A. N. Kang—are two of the best on shelves now that address animals in the natural world and the ways in which they adapt to warming weather (both the natural and man-made kind).

Moore’s visually striking Sea Bear—she renders the vivid art via pencils, watercolors, ink, crayons, and colored pencils — is told from the point of view of a polar bear who, long ago, learned to be patient from her polar bear mother. We read, after all, that patience is necessary for their very survival—patience “when hunting….with weather….[and] in darkness.” This bear’s first-person, present-tense voice, speaking as it does for all polar bears, draws in readers; we can’t help but want to go her way. At the story’s beginning, she looks right at us from the page, surrounded by a night sky in varying shades of deep, vibrant blues.

The polar bear watches the ice, waiting for spring. The sun breaks the ice open, so the bear “stalks” seals on the floes, eating and then resting. When summer arrives, the bear still needs to eat, yet the ice is thin and, we read, there is less ice to stand on as each day goes by. It’s summer, yes, but in a closing note, the author notes rising temperatures and a reduction of sea ice in the Arctic. On swims the bear in spreads both dramatic and eloquent—she passes an Arctic shark, star-skinned narwhals, walruses, and a whale singing an ancient song. The bear survives a storm at sea but paddles on. She waits on land, growing thinner. But she knows summer will end and the ocean will once again freeze, giving her the ice she needs. She waits patiently with her cubs.

Moore peppers this story with moments of pleasing alliteration: the bear passes a “weary raft of wary walruses” and is “tossed by a tempest….at sea.” The story is infused with a gentle lyricism. In the penultimate spread, Moore writes:

“I will teach the sea’s rhythm to my cubs and whisper to them in the dark.

Polar bears are patient beasts, as patient as glaciers. …”

That final line is, in fact, repeated; it appears as the first line of the book, and this repetition brings the story full-circle in a satisfying way. Polar bears may be able to “outwait almost anything,” but Moore goes far in subtly reminding readers that humans’ effect on the planet is endangering their very lives. “I wanted to give polar bears a voice,” she writes in the closing note, “to tell what life is like for a bear in a changing Arctic landscape.”

We follow this one female squirrel, who hoards the seeds; dines on some; and then eats all the “crumbs” when winter arrives. And those seeds Squirrel can’t find, ones she once stored in a cache? They germinate and, once winter departs, “Squirrel sees a tiny sprout.” The sprout becomes a sapling. The sapling becomes an oak tree. We see Squirrel setting in with a nest of babies. “Squirrels are the heart and key / to oak trees yet to be” in an acorn cycle that, we read at the book’s close, knows no end.

Kang’s soft, cozy, textured colored pencil illustrations, colored digitally, are endearing, though she never anthropomorphizes the squirrels (or any other animals in the book). In the opening spread, she depicts a boy and a dog in front of a log home. The final spread shows an elderly man and a dog in front of the same home—and with even more oak trees on the property. Could it be the same person? I think so, and it’s Kang’s way of showing the never-ending, reliable nature of squirrels—always germinating these seeds, always being the unsung “heroes of forest restoration.”