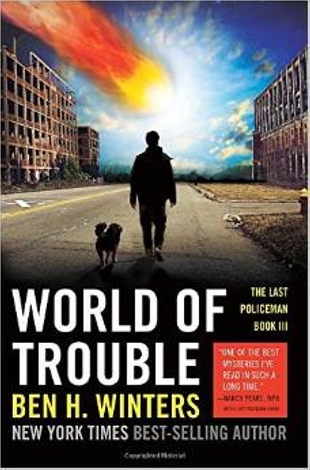 This was an error, and I see that now.

I’m still right and she’s still wrong, but I cannot just let her be gone. Whatever she thinks, whatever she’s doing, she is still my baby sister and I am the only person left with a stake in her welfare.

It is 14 days before the world as we know it comes to an end. An asteroid of rock and ice, 2011GV1 (aka Maia), will slam into Earth’s surface and unleash an extinction event that will almost certainly obliterate humankind.

Detective Hank Palace is one of the last people still dedicated to his job in the months leading up to Maia’s arrival; a police officer doggedly solving crimes before the world ends a spectacular, fiery death. Before the rapidly approaching end, Hank has just one all-consuming goal: to reconcile with his standoffish younger sister, Niko. Like her brother, Niko is single-mindedly dedicated to a last grand act. Unlike her brother, however, Niko believes she can stop the doomsday asteroid by joining a militant group that will expose the government’s nefarious intentions.

Hank knows that Niko’s desperation to stop the inevitable is ridiculous, but he regrets letting her leave…so he goes on a very long journey, a dog and a former thief as his companions, to find his sister before it all falls down.

The final book in the Last Policeman trilogy, Ben Winters’ World of Trouble is the grand, bleak finale to a series rooted in inevitability. From the very onset of the trilogy in The Last Policeman,characters and readers both know that the end is coming and that there is no escape. This fatalism, this obsession with the pregnant pause, if you will, makes that book so fascinating (and earned it an Edgar Award). In contrast, Countdown City and World of Trouble have a tough act to follow, expanding the trilogy’s reach a little broader as civilization’s decline becomes more rapidly pronounced with each passing day. Tropes abound in the last two books of the trilogy as humanity has regressed predictably into looting, raping, hyperviolent madness; the shift of focus away from a more insular, single-murder mystery to a grander vision of a pre-apocalyptic (and utterly dystopian) world isn’t entirely effective. (This becomes most pronounced in World of Trouble, arguably the weakest book overall in the trilogy.)

And yet, at the heart of it all, there is one constant: Detective Hank Palace.

Hank Palace is a rundown, bearded Hero. He’s a man who won’t let a murder go unsolved in The Last Policeman, and who won’t let his sister go without a fight in World of Trouble. The question one has when reading Palace’s journey is simple, but provocative: What is the point? Why must Hank Palace solve that crime, or chase down his sister across the Midwest? If it’s all going to end anyway, I ask again: What is the point? This is the central question to all the books in the trilogy, but at its bleakest and perhaps most (or is it least?) poignant in this third and final installment.

You see, the issue I have with World of Trouble (and to some extent Countdown City) is entirely reflective of this question, in a metatextual way. What is the point, Palace? I can appreciate the character building throughout the trilogy. I applaud the sense of antiquated gallantry, Hank’s incessant need to do the right thing in the face of complete moral degradation and desperation. I can even understand his unconsciously narcissistic, Bogart-esque approach to detective work and the dames who need his help in order to get anything done. Hank is what makes this trilogy readable; he’s the only driving force that keeps the series moving forward to its promised conclusion. And I like and appreciate this characterization very much. But the actual story itself? Who cares about the cultists, or the drugged out kids, or the lady who believes that space dust is killing her slowly? Who cares about Niko and some of the more outlandish action scenes and manufactured drama? The problem is that in both Countdown City and World of Trouble, Hank’s journey is the ultimate form of superfluous filler to the great inevitable finale.

That said…it’s almost worth it for the finale.

Although World of Trouble is undoubtedly the weakest book in the trilogy from a holistic perspective, Winters knows how to end a story, and he does so with that same restraint and fatalism that made The Last Policeman so good. There are no last-ditch technological solutions here, no deus ex machina to save the humankind from death. The ending of the series is somber, dog-tired, and perfect—almost redeeming everything that comes before it. Almost.

If you, like me, were not as impressed with Countdown City, you’ll probably feel the same way about World of Trouble. But…I’d still recommend reading the trilogy all the way through to the bitter end.

Because, damn, what a killer last page.

In Book Smugglerish, 6 megatons of cold, brutal space rock out of 10.