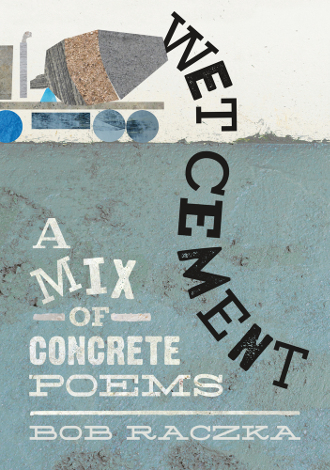 It’s already mid-April, but I’ve still got time to acknowledge and celebrate National Poetry Month. It’s an annual month-long celebration brought to readers everywhere by the Academy of American Poets. This year, in fact, is the 20th anniversary of the event, which shines a spotlight on poetry and its place in our culture. In honor, I thought I’d tell you today about my favorite new children’s poetry title I’ve seen of late, Bob Raczka’s Wet Cement: A Mix of Concrete Poems.

Raczka has written poetry books, as well as fiction picture book titles and many books about art and art history. His previous poetry titles, including Lemonade: And Other Poems Squeezed from a Single Word (which I’ve written about previously here at Kirkus) and Guyku: A Year of Haiku for Boys, are books well-worth readers’ time. Raczka is a talented poet. I chatted with him here at Kirkus two years ago about a holiday haiku title. (That’s right: Santa is a haiku fan.)

As the subtitle of Wet Cement tells you, this is a collection of concrete poetry. If poetry hasn’t regularly been a part of your life since fifth grade, let me remind you that concrete poetry relies on typography and the shape of the poem itself to communicate meaning. It’s often called visual poetry or shape poetry. Raczka calls them “word paintings” on the first page of this collection, noting that he is painting a picture on the page and that the words he chooses serve as his paintbrush. “A poet uses words like colors,” he writes, “to paint pictures inside your head.”

It’s hard to do concrete poetry well. It’s easy to see it as gimmicky and to generally make a mess of things and/or bore the reader. But Raczka brings depth to these poems, layers of meaning beyond just what he offers in that clever book title. And with the title of each poem, as he puts it, he creates pictures with letters. In the poems, he creates pictures with words.

It’s challenging to describe these things in words, but I’ll try: In one poem, called “Clock,” the capital “l” in clock is placed on top of the “o” in such a manner that it looks like a clock set at 3:00. The poem itself is about restless children in a classroom at five ‘till three, “but the kids in my class say it’s five ‘til free,” the speaker in the poem concludes. That final line is place on a circle of text in such a way that the entire poem looks like a big clock set at precisely 2:55. Pretty much brilliant.

There are poems about a hanger, hopscotch, a crossword puzzle, icicles, tunnels, and much more. Raczka strikes a variety of tones in the collection. A poem about a pop-up in baseball is light-hearted and fun; “Lightning” is fierce; a poem about autumn is tender, observant; and my favorite one, which is about an eraser, is presented from the point of view of a self-deprecating writer who has made a “dumb mistake” in writing. But no worries: “Erasers will stick by you … a friend right to the end.” Those final six words are in the shape of a pencil---the capital “a” is a pencil tip (brilliant again)---and the poem’s title is misspelled as “eracer” with an incomplete “c,” as if the writer has already attempted to rectify his or her error. “Balloon” is hopeful, and the middle “l” and “o” of the word have flown up to the top of the page, looking just like the subject of their poem.

Fittingly, the final poem, called “poeTRY,” is all about the very challenge of poetry itself – to create a new awareness in readers with a minimum of words. “Poetry is about taking away the words you don’t need,” he writes. Each succeeding line removes a word from that sentence, revealing layers of profound meaning about poetry and ending in the word “try.” (Note the poem’s title. BRILLIANT AGAIN.)

And this smart poem brings everything full-circle, because in the book’s opening, Raczka invites readers to play with words the way he does. Indeed, it’s worth noting this collection would make a great writing prompt with children and even teens in language arts classrooms and libraries. Either way, it’s a chance for readers of all ages to see a creative and skillful poet at his craft.