A World in Ice 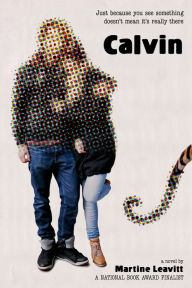 If you have to try to make something in your imagination go away, that means you are acknowledging it exists even as you are trying to pretend it doesn’t. As soon as you wonder if you’ve made me go away, you’re thinking about me again, and there I am. Whenever you think of me to wonder if I’m gone, I’m there, I’m here.

Calvin was born the day the last Calvin & Hobbes comic strip was published, and his connections to Bill Watterson’s decade-long masterpiece don’t end there. As a child, he had a stuffed tiger named Hobbes—who eventually died a sad death in the dryer—and a best friend named Susie. Now he’s 17 years old, and out of nowhere, Hobbes has started talking to him. Calvin can’t see Hobbes—he’s always just out of his line of sight—but he knows he’s there.

Shortly thereafter, Calvin finds himself in the hospital after having what his doctor says was a schizophrenic episode in English class. His doctor believes that with the right combination of drugs and therapy, they can get it all under control—but Calvin is convinced that there’s another answer. He’s positive that if he completes a pilgrimage—if he walks across frozen Lake Erie, from his hometown in Canada to Bill Watterson’s hometown in Cleveland, Ohio—that Watterson will be inspired to draw just one last strip, and that last strip will fix everything.

So off he sets—with Hobbes, who he knows isn’t real, but seems real, and with Susie, who seems real, but may not be—on a life-threatening journey across a frozen wasteland. While there are a few iffy elements—one major plot point will be hard for some readers to swallow, and the pacing is so off toward the end that it feels like Leavitt literally pressed a fast-forward button—it’s a solid, tight read. It’s sensitive and empathetic, funny and suspenseful and surprising. Leavitt weaves in lots of fascinating history and folklore about Lake Erie that enhance the narrative rather than distracting from it; and at all times, she shows an appreciation for the utter beauty of an endless icescape without ever diminishing its inherent dangers.

The White Darkness, by Geraldine McCaughrean

A British teen heads off to Antarctica with her uncle on the trip of a lifetime…and discovers herself in the middle of nowhere with a man she’s known her whole life, but doesn’t really know at all.

Shipwreck at the Bottom of the World: The True Story of the Endurance Expedition, by Jennifer Armstrong

Nonfiction about the 1914 Shackleton expedition to Antarctica, a story that definitely falls into the If It Wasn’t True, Readers Would Say It Was Unbelieveable category.

A boy from New York on a scientific expedition in Greenland; a girl who lives in a generations-old secret underground colony. Paths cross, discoveries are made.