A Writer Who Makes Her Voice Heard Around the World: 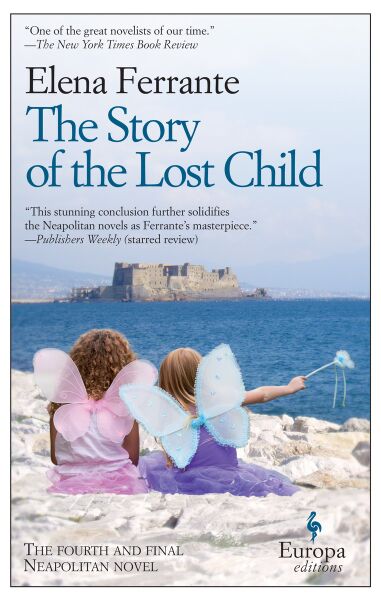 Where to begin talking about Elena Ferrante’s powerful Neapolitan novels? I waited until getting an early copy of the last book, The Story of the Lost Child, to start reading the series, because so many people have been obsessed with finding out what happens next that I figured it would be less torture to read all four books at once. I dove in a week and a half ago and just emerged last night, stunned, disoriented, not quite ready to return to my own life.

Almost 1,700 pages might seem like a lot to read, but Ferrante’s prose gallops ahead, commas stringing clauses into run-on sentences, the better to devour the books in a gulp. Though Elena, the narrator, is a writer and an intellectual, the books aren’t highly literary. Like 1970s feminist novelists such as Marilyn French and Marge Piercy, Ferrante has written a potboiler, a book that's accessible to all kinds of readers, complete with sex on the beach, love triangles of all sorts, unrequited love that's nurtured for decades, hatred that's nurtured even longer, violence, murder, extramarital affairs, family feuds, social climbing, back-stabbing, double-crossing business deals, organized crime, births and miscarriages, weddings and funerals, triumphs and tragedies. I could go on, but you get the idea.

It's hard to write about these books—My Brilliant Friend, The Story of a New Name, Those Who Leave and Those Who Stay, and The Story of the Lost Child—in any specific way, because they essentially form one long novel, and you don't want to give anything away after about the first half of the first book. Though we know that Elena is a 66-year-old writer living in Turin as she tells this story and that her best friend, Lila, has disappeared, there’s a great deal of suspense from the beginning. How does Elena manage to keep going to school when she has no money to pay for books? Will Lila find a way to improve her life though her parents make her drop out after fifth grade? Will they get out of the part of Naples Ferrante refers to only and always as “the neighborhood,” where poverty reigns and men control women with their fists?

I don’t usually care about spoilers—how an author gets where she’s going is more important than what happens at the end—but these books are so plot-heavy, and there are so many turnarounds, that wondering what’s going to happen next is definitely part of the fun. Especially since you can see the bad decisions coming from a mile away, and there's the exquisite tension of wondering whether Elena and Lila will make the mistakes you think they're going to make, whether the decisions you fear will be mistakes won’t be, whether the good news will turn out to be disastrous in the end. Fortunes twist and turn, relationships mutate. Each book finishes with a cliffhanger. My Brilliant Friend ends with a wedding, and just when you think Ferrante might be going all Jane Austen on you, something happens in the very last lines that changes everything—and The Story of a New Name picks right up and keeps going.

But of course Ferrante has something much larger in mind than soap opera. Like those ’70s feminists (and like many soap operas, for that matter), she’s capturing her society with a focus on women’s roles. Elena and Lila are born just as World War II is ending, and they live through endless upheavals. As well as gender, Ferrante specializes in class distinctions, pinning down the differences among the shoemaker’s, the porter’s, and the bar owner’s families and the even subtler distinctions between the genteel worlds of a high school teacher and a college professor. Elena spends years trying to speak up in intellectual discussions among men, until she finally realizes she has something to say that they know nothing about—women’s issues, women’s lives—and discovers her own voice. In this brilliant, angry, honest series, Ferrante has found her voice and made it heard around the world.