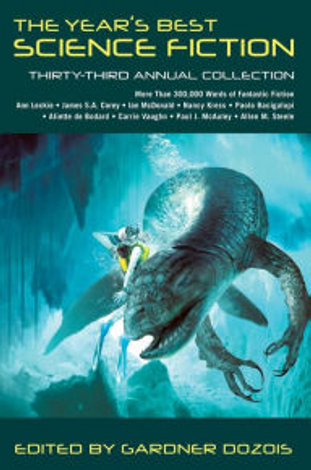 Every year, thousands of science fiction and fantasy stories are published across hundreds of publications around the world. The sheer size of the genre is impossible for a single person to comprehensively read, which is where anthologies collecting the best of the year come into play. One of the best known anthologies is The Year’s Best Science Fiction, which has, for over three decades, collected the best the genre has to offer.

Gardner Dozois was born in Salem, Massachusetts on July 23rd, 1947. He noted that his love for science fiction was born out of the desire to be somewhere “other than a decaying mill town in New England, at some other time than the 1950s.” In High School, he was an avid reader of Andre Norton and Robert A. Heinlein’s juvenile novels, and began scouring for magazines and anthologies in local bookstores. He subscribed to magazines such as Galaxy and loved Ace’s double novels.

Following his graduation from high school in 1965, Dozois joined the US Army, where he served until 1969 as a military journalist. After leaving the military, he moved to New York City, where he picked up work as an editor in the city’s science fiction scene. He began working for Galaxy Magazine right as Frederik Pohl left the magazine. “I was originally brought in to break the then-infamous ‘galaxy backlog’, a six month pile of unsolicited submissions that had piled up. Dozois cleared the backlog in a week and a half.”

There, he “managed to gain a reputation in some SF circles as a ‘hot new writer,’ greatly aided by support from Damon Knight”, former member of the Futurians and a major figure in science fiction circles. Dozois was busy in the late 1960s starting with his short story, ‘The Empty Man’, in the September 1966 issue of If Magazine. His streak of short fiction extended through the mid-1980s, and he placed stories in anthologies such as Damon Knight’s Orbit anthologies, Robert Silverberg’s New Dimensions anthologies, Fantastic magazine, and others during this time. In 1975, he published his first novel, co-written with George Alec Effinger, Nightmare Blue. In  1978, he published his first solo novel, Strangers.

In the early 1970s, he began to branch into editing when he published his first anthology A Day in the Life, in 1972. Dozois noted that he had gained some critical skills for an anthology by working at magazines, where he worked through slush piles and worked closely with authors. He co-edited his second anthology, Future Power with Jack Dann in 1976 and Another World: Adventure in Otherness in 1977. In 1978, he picked up the Best Science Fiction Stories of the Year anthologies with its seventh installment from Lester del Rey.

‘Year’s Best’ anthologies have been a long-standing feature within the science fiction world since the first volumes appeared in the late 1930s and early 1940s. At the time, genre stories appeared predominantly in magazines, which collected and reprinted stories in one convenient package, while later versions were annual affairs run by a single editor, such as Star Science Fiction (Frederik Pohl), Orbit (Damon Knight), New Dimensions (Robert Silverberg), and Universe (Terry Carr).

Another line of anthologies was the one that reprinted the year’s best stories, beginning with The Best Science-Fiction Stories 1949, edited by Everett F. Bleiler and T.E. Dikty, which ran for six years, while Judith Merril edited twelve installments of SF: The Year’s Greatest Science-Fiction and Fantasy Stories and Novelettes. Dozois’s work on the Best Science Fiction Stories of the Year lasted until 1981, with the tenth installment when his publisher, Dutton, decided to discontinue the series.

Following the end of that series, editor Jim Frenkel invited Dozois to bring a new series of anthologies to his new publishing company, Bluejay Books. In 1984, he began what is probably one of the best known series of anthologies, The Year’s Best Science Fiction—thick, accompanied by a lengthy introduction summarizing the events of the science fiction field in the prior year, as well as a long list of honorable mentions. The series lasted for three years, until Bluejay folded. Dozois then brought the series to St. Martin’s Press, which has published the series ever since.

“Jim Frenkel probably deserves a fair amount of credit for the success of the series,” Dozois noted. “I wanted to do a regular-sized volume, the size of the one I’d been doing for Dutton, but Jim insisted that we do a huge fat volume instead, as big as we could get it to be. I didn’t think it would work, but I think the huge size of the volume, now up over 350,000 words per volume, has always been one of its selling points, so Jim was right.”

To compile each installment, Dozois skimmed every genre publication he could find, taking notes on the stories that really stood out for him, and would reread them when he was compiling the volume. He would then cull the list down to fit them into each installment. “Even with a book as huge as mine, there are quite a few stories every year that I would gladly have used if I had the room for them, and those are among the ones you agonize over the most, trying to make the decision to use it or not.”

Dozois’s work editing wasn’t limited to the anthology series. In 1977, Davis Publications decided to stand up a new science fiction magazine, named for one of the genre’s best-known authors: Isaac Asimov’s Science Fiction Magazine. Dozois came on board as the magazine’s associate editor, but left after just a year. “I noticed that he was rejecting the stories that I told him I thought he out to buy and buying the stories that I told him he ought to reject,” Dozois told Mike Ashley in Gateways to Forever: The Story of the Science-Fiction Magazines from 1970 to 1980, “so it became clear that there was little point in continuing the relationship.” Ashley noted that this was unfortunate: Dozois had been adept at discovering new authors. When Dozois returned to the magazine in 1985, he helped to “develop its reputation further and under his editorial guidance Asimov's became the most important magazine of its generation.” Dozois remained at the magazine through 2004, when he was succeeded by Shelia Williams. Dozois published a numerous other anthologies along the way, such as Robots (with Jack Dann) in 2005, Galactic Empires in 2008,

As Dozois was editing Asimov’s, he continued to publish The Year’s Best Science Fiction, which became one of the field’s most important short fiction surveys. For his efforts, he earned the Hugo Award for Best Professional Editor every year between 1988 and 2004, save for two years (1994 and 2002).

In June 2016, Dozois will release the thirty-third installment of The Year’s Best Science Fiction, once again providing an indispensable survey of genre fiction for eager readers.