You Say You Want A Revolution 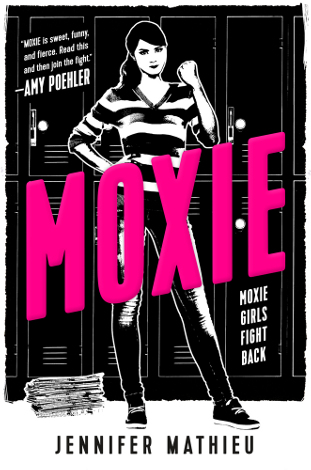 Talky Talk: Straight Up With A Riot Grrl Twist

Somehow, this cover incorporates a ton of important elements of the story (the lo-fi, black and white photocopied elements of zines, high school, girls standing up for themselves) in a deceptively simple design. I love the black/white/pink cover choice, and not just because I’ve rarely met a black and white pattern or graphic I didn’t love (this is where I admit that I’m jealous of zebras). It’s such an appealing cover choice: it’s got a lot of cool, youthful appeal, and the girl clearly has agency.

I’ll take this over “stock photo of girl looking mournfully away from the camera” any day—and it easily could have gone that way, given that this story covers a lot of serious topics.

Vivian is sick of the toxic masculinity that pervades her South Texas high school. There are double standards everywhere, usually centered around the football team—after all, they’re providing a valuable service by entertaining people, so who cares if they’re wearing misogynistic t-shirts and ranking their classmates on “fuckability?” (I say this as someone who loves American football, the sport—but not the “look the other way” culture that protects abusers and exploits talent.)

When Vivian goes through her mother’s memory box, she finds out that her overworked, exhausted mom used to be a Riot Grrl in the 90s—she got out of their tiny Texas town and was quite the badass. Inspired by what she finds—especially the music—Vivian anonymously distributes her own zine. Suddenly, Moxie is a Thing with a capital “T.” Girls are banding together to challenge the administration’s double standards, and adults are taking notice… for better or for worse.

This is Mathieu’s best work yet: a compulsively readable story about burgeoning feminism, reaching out across social divides, challenging the status quo, and standing up for what you believe in.

I love Vivian. She’s the kind of teenager that makes me want to Breakfast-Club-fist-pump as she navigates the tricky waters of using the “f” word (feminism, natch), bringing old and new friends together, dealing with an unsupportive (occasionally vindictive) administration, first love, and watching her mother start dating again. She’s the sort of thoughtful kid which makes her age-appropriate flaws seem like something she’ll work through instead of a permanent character trait. (Read: she can be a total brat to her mother, but you know she won’t be that way forever.)

Vivian’s at her most relatable when she starts using the word “feminist” to describe herself in a crowd of not-so-receptive friends. (I’ve been there. I think a lot of us have.) Eventually, she’s empowered by support coming from unexpected corners, and watching her stand up for her beliefs is a total treat. If only we were all so enlightened at her age!

First of all, there is nothing like being noticed by the guy you’re crushing on—especially when he thinks you’re cute and smart. The romance in this book comes across as genuine and sweet.

OMG, Becky, can you even, like, have a boyfriend AND be a feminist? Like, don’t feminists hate men? Obviously, we know you can, but that’s actual feedback that women get—including Vivian. While I’ve seen some people comment that the romance portion of the book isn’t necessary, I think it is. It’s a subtle and realistic way of demonstrating that feminists don’t hate men… even when their male allies say naïve or ignorant things.

Having Vivian’s love interest inadvertently #NotAllMen her when another student is accused of rape is a great way of addressing the topic of male allies, too—and another opportunity for the characters to learn and grow.

Talky Talk: Straight Up With A Riot Grrl Twist

High school teachers have such an advantage when it comes to writing contemporary dialogue, and Mathieu uses her “in” well. The dialogue (and text messages) are realistic, but never bogged down in slang.

Then there’s the 90s Riot Grrl culture, which is a fun bridge between parent and child. Sometimes, when a teen character is heavily into pop culture from before they were born, it comes across as though the author wants an excuse to show how their favorite media as a teen is still relevant. Not so, here. I think Vivian comes by her interest in Riot Grrl culture in an honest way: it’s both an answer to the toxic culture at school, a musical escape, and a way to learn more about her formerly punk-rock mother.

When I called this “compulsively readable” earlier, I meant it: Mathieu’s clear, straightforward writing makes Moxie a book that’s hard not to binge-read. Pick a few uninterrupted hours for this one, because you’ll resent anyone who distracts you.

For a relatively short, fast-paced book, Moxie touches on a lot of intersectional issues. Although Vivian is white, her new friends (some of whom are POC, or non-cishet-women) aren’t afraid to gently point out when her privilege is showing. Could there have been more, or did I want more? Sure. But for a book that could almost be read as a starter guide to contemporary feminism in fictional form, it’s pretty impressive.  I think Mathieu does an excellent job of introducing concepts and themes so that curious kids can find out more.

Book, I had a feeling you and I were going to hit it off, and I’m so glad that I was right. Our date was full of sympathy winces and smiles, and by the time you finished your story, I was ready to fist pump and start my own mini-revolution. I’ll start with making sure everyone else I know gets a chance to read you.