Your Guidebook to 2019's Sensational Lineup of Science Fiction, Fantasy and Horror (Part 3) 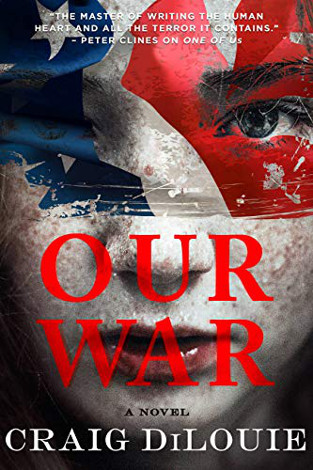 As seen in Part 1 and Part 2, 2019 is shaping up to be a terrific year for speculative fiction. Here's the rest of the 123 titles that highlight this year's stellar lineup of Science Fiction, Fantasy and Horror...

August science fiction includes stories with some heavy themes. Our War by Craig DiLouie, for example, presents a harrowing depiction of a future America fighting a second American civil which uses children as soldiers. Christopher Brown switches gears with Rule of Capture, a legal thriller set in the world of his harrowing Dysyopian novel Tropic of Kansas. The Orwellian novel The Memory Police by Yoko Ogawa (and translated by Stephen Snyder) takes a hard look at the dangers of state surveillance. Joel Dane's Cry Pilot is a military science fiction novel about a man in an infantry squad with a mysterious past and a deadly enemy armed with bioweapons. In Weston Ochse's military horror novel, Dead Sky, the surviving members of a Tactical Support Team from Afghanistan discover that their leader is possessed by the souls of entities older than time itself. A team consisting of three veteran astronauts and six teenagers embark on a twenty-four-year mission to

colonize another planet in Temi Oh's Do You Dream of Terra-Two?  Nicky Drayden blends science fiction, dark humor, and magical realism in Escaping Exodus, a far future story of a young woman who could decide the fate of humanity. First Cosmic Velocity by Zach Powers presents an alternate 1964 in which the failures of the Russian space program are kept secret by using twins as astronauts to dupe the public. Finally, in George R. R. Martin's Wild Cards, a shared world of superheroes, gets a new entry with Knaves Over Queens.

As for fantasy releases, look for The Dragon Republic by R. F Kuang, sequel one of last year's best novels, The Poppy War, as it continues the heroic story of Rin and her shamanic powers. Turning Darkness Into Light by Marie Brennan begins a brand new fantasy-of-manners series—a spinoff of the popular Lady Trent novels—that features the granddaughter of Lady Trent herself. Julie E. Czerneda's The Gossamer Mage features a lone mage who must stand up against a Deathless Goddess who controls all magic. Gods of Jade and Shadow by Silvia Moreno-Garcia, a dark fairy tale inspired by Mexican folklore, sends a young woman on a life-changing journey at the behest of the Mayan God of Death.

September science fiction will bring Margaret Atwood's highly-anticipated sequel to The Handmaid's Tale to shelves; The Testaments is where readers will finally get to learn what happens to Offred. In William Gibson's long-awaited new novel, Agency, a gifted "app-whisperer" finds her life endangered after being hired to beta test a mysterious new product. Annalee Newitz plays with the tricky trope of time travel in The Future of Another Timeline, in which a pair of time travelers aim to correct the course of history against all odds. Two more books of interest if you like time travel: Shatter War by Dana Fredsti & David Fitzgerald (the second book in the Time Shards series), follows the exploits of a team assigned to restore world order after time itself shatters and mixes 600 million years of Earth's history; and The Silver Wind by Nina Allan promises to explore the nature of time itself. Meanwhile, Bob Proehl examines the prejudice against people with superhuman abilities in The Nobody People. Gary K. Wolfe teams up with the Library of America for a second snapshot of American Science Fiction in American Science Fiction: Eight Classic Novels of the 1960s, a two-volume collection that includes nine novels from that decade by Frederik Pohl & C. M. Kornbluth, Theodore Sturgeon, Leigh Brackett, Richard Matheson, Robert Heinlein, Alfred Bester, James Blish, Algis Budrys, and Fritz Leiber. September will also see the release of a new novel by Becky Chambers (To Be Taught, If Fortunate).

N. K. Jemisin's next novel, a contemporary fantasy called The City We Became, pits five New Yorkers against ancient evil in order to save New York City. Urban fantasy fans waiting for Seanan McGuire's next October Daye novel can anticipate The Unkindest Tide which is due out this month. The jacket copy of Steven Brust's next fantasy, The Baron of Magister Valley, goes to great, snarky lengths to say it's not a retelling of The Count of Monte Cristo...but this reader has his doubts. The Resurrectionist of Caligo by Wendy Trimboli is a Victorian-tinged fantasy noir about a bodysnatcher and princess who team up to solve a murder. The historical fantasy novel The Harp of Kings by Juliet Marillier features a young woman with musical talents who has aspirations of becoming an elite warrior. Jennifer Giesbrecht's debut dark fantasy, The Monster of Elendhaven, features a monster roaming the streets and seeking revenge on everyone who wronged the city. In The Hanged Man by K. D. Edwards (latest in The Tarot Sequence, which imagines a modern-day Atlantis off the coast of Massachusetts), the last member of a murdered House tries to protect his ward from a forced marital alliance with the Hanged Man.

Get your September short fiction fix with Ellen Datlow's The Best Horror of the Year Volume Eleven, latest in the always-entertaining horror series.

October brings us Sue Burke's Interference, taking place two hundred years after the colonization depicted in 2018's Semiosis, in which a new set of explorers arrives from Earth, threatening to upset the precarious balance of their existence. In Supernova Era by Chinese author Cixin Liu (and translated by

Joel Martinsen), catastrophe strikes in the form of a supernova of a faraway star that gives every human on Earth over the age of thirteen one year to live. If space adventure is your game, watch for Starship Alchemon by Christopher Hinz, in which a newly discovered creature in space, made stronger by a troubled psychic, threatens the entire human species. Meanwhile, The True Bastards by Jonathan French is a swashbuckling adventure fantasy sequel to The Grey Bastards about band of half-orcs sworn to their commander.

Short fiction readers should be on the lookout for The Best American Science Fiction and Fantasy 2019 edited by John Joseph Adams & Carmen Maria Machado.

Series expansion and sequels seems to be the early name of the game looking far ahead to November 2019! Kameron Hurley concludes her Worldbreaker Saga epic fantasy series with The Broken Heavens with a dying nation seeking to stop the onslaught from a parallel world. The God is Not Willing by Steven Erikson begins a new sub-trilogy of his vast Malazan Book of the Fallen fantasy series, this one called The Witness Trilogy, which focuses n the adventures of Karsa Orlong. Kel Kade's Fate of the Fallen, first book in a new epic quest series called The Shroud of Prophecy, about a pair of adventurers out to save the world, one looking forward to the task, the other not so much. For science fiction readers, the techno-thriller Invisible Sun by Charles Stross (the third book in his Empire Games series) puts the existence of all alternate timelines in jeopardy as the stakes escalate to dangerous levels.

Not much can be said for the faraway literary landscape of December. But what can be said is pretty tantalizing. Splintegrate by Deborah Teramis Christian (a standalone sequel to 1996's Mainline) features a professional dominatrix hired by a planetary government, turned into an assassin by technology, and tasked with taking out that planet's crime cartel boss. Rich Larson's Violet Wars series follow-up to Annex will be Cypher, in which two outsiders (both survivors of the alien invasion) may hold the key to unlocking the alien the invaders' technology. And finally, there's another shared superhero world Wild Cards novel coming: Double Solitaire by George R. R. Martin and Melinda Snodgrass has superhero Blaise on a spaceship fleeing the turmoil that exists between superpowered beings.

So that's 2019 as it looks right now. I can't wait to dive into these adventures. How about you?