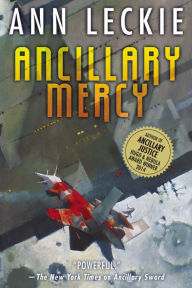 With the seemingly endless parade of genre books vying for your attention every month, it's my pleasure...no, my duty...to help you find your way to the very best speculative fiction reads. If you're looking for stories that will amaze you, surprise you, and make you think, all while entertaining you, then read on....

A Borrowed Man by Gene Wolfe

WHAT IT'S ABOUT: Set in a sparsely populated future with robots and clones, a woman absconds with a so-called borrowed person, a clone with the uploaded consciousness of an deceased mystery writer. She hopes to unlock the secret to an immense family fortune.

An Ancient Peace by Tanya Huff

WHAT IT'S ABOUT: Torrin Kerr and her military cohorts search for a weapon powerful enough to destroy planets, one built by an alien race that has long since given up fighting.

WHY YOU MIGHT LIKE IT: Huff's swift-moving stories are realistically imagined and fun. This is also the start of a new spin-off series from her popular Confederation series.

WHAT IT'S ABOUT: At Athoek Station, Breq, a soldier who used to be a warship, runs into the interstellar ruler who blew up Justice of Toren, the ship that previously housed Breq’s consciousness. Rather than flee for safety, Breq confronts the enemy, thus aiding the people of Athoek Station.

WHY YOU MIGHT LIKE IT: This concludes a multiple-award-winning trilogy. Don't you want to find out how it ends?

WHAT IT'S ABOUT: Every 2,000 years, a dark star appears in the sky and brings invaders bent on destruction. The fate of the nation of Dhai rests with an illegitimate ruler and a scullery maid who wields a magic that is powerful but unpredictable.

WHAT IT'S ABOUT: In the near future, a girl named Zoey Ashe—the heir to her eccentric father's fortune—is protected by her father's suit-wearing gang from the cybernetically enhanced killers who are chasing her.

WHAT IT'S ABOUT: Set in a retro-futuristic solar system where all the solar system's planets are populated, the rebellious daughter of a legendary gothic filmmaker disappears while filming a documentary. Only by piecing together the film fragments can her life story be told.

WHY YOU MIGHT LIKE IT: Radiance defies genre categorization by partaking of several of them: decopunk, pulp SF, alternate history, space opera, and mystery. There's something for everyone!

WHAT IT'S ABOUT: Caine Riordan, a military intelligence operative and a reluctant diplomat, goes on a diplomatic mission to the homeworld of the alien race whose invasion he helped stop. He's looking for an alliance, but finds another alien race out to destroy humanity by thwarting that alliance.

WHAT IT'S ABOUT: In the year 2066, a spaceship is detected approaching Saturn and slowing down. The nations of Earth race to investigate, each looking for a strategic advantage, but not knowing what to expect from alien visitors.

Shadows of Self by Brandon Sanderson

WHAT IT'S ABOUT: In a world where strange magic and technology co-exist, acts by a supernatural assassin aim to stir up labor strife and religious conflict. It's up to a former bounty hunter and his associates to find him and stop him before the damage becomes irreversible.

WHY YOU MIGHT LIKE IT: The story uses science fiction as a mirror to our real-world society as it wrestles with issues resulting from the changing landscape of law in the face of rapidly changing technology.

ies that showcase the power of speculative fiction.

The Monstrous edited by Ellen Datlow

WHAT IT'S ABOUT: A collection of 20 suspenseful stories by the likes of Peter Straub, Jeffrey Ford, Caitlín R. Kiernan, Kim Newman, Sofia Samatar, A.C. Wise, and many more masters of the weird.

WHY YOU MIGHT LIKE IT: It's Halloween month; you should be reading something scary! (Watch this space next week for more horror recommendations!)

When you find yourself with some reading time, be sure to fit in these other juicy multi-author anthologies and single-author collections of short fiction stories:

o  Ghostly: A Collection of Ghost Stories by Audrey Niffenegger

o  Hanzai Japan: Fantastical, Futuristic Stories of Crime From and About Japan edited by Nick Mamatas and Masumi Washington

o  I Am Crying All Inside by Clifford D. Simak

o  The Ghost of a Model T by Clifford D. Simak