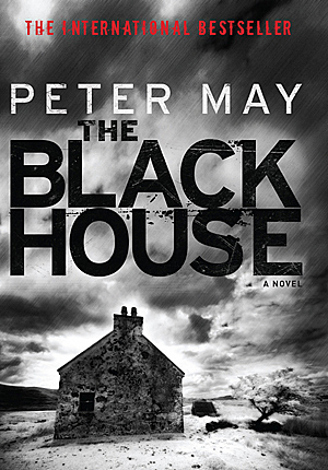 Accept my apologies right off the bat for having not read every crime novel published during the last 11 months. I’m only one person, after all. And I have to sleep sometime. Fortunately, my all-too-human limitations haven’t prevented me from enjoying a wide range of distinctive and even memorable works within the genre. Herewith, my favorites of the bunch, most of them from U.S. publishers, but a couple from across the pond.

The Blackhouse, by Peter May: Fleeing a crumbling marriage in Edinburgh, Det. Sgt. Fin Macleod hies off to the Isle of Lewis, in Scotland’s Outer Hebrides, to investigate a ghastly homicide similar to one committed on his big-city home turf. However, Macleod’s history on that wind-scoured island—he was born there and remains haunted by childhood loves and losses—adds a treacherous personal dimension to this case. The sus

pects are all people he once knew well and the solution may dwell in a trauma he’s long suppressed. This book, abundant in back-story, manifest gri

ef and corrosive fears, is the opening installment in a trilogy.

Broken Harbor, by Tana French: Det. Sgt. Mick “Scorcher” Kennedy of Dublin’s Murder Squad boasts one of his unit’s highest solve rates. So it’s no surprise that he’s handed the bizarre case of a father, Patrick Spain, and his two children who were stabbed to death in a half-vacant coastal housing development. Spain, a victim of Ireland’s recession, might well be behind this ugly business. However, the crime scene raises more questions than it provides answers. Kennedy’s job is further complicated by his personal history: His family used to vacation nearby, and his bipolar sister remains besieged by memories of their mother’s suicide during one such holiday.

The Candle Man, by Alex Scarrow (UK): This thriller begins and ends aboard the ill-fated RMS Titanic in 1912, but takes place primarily in London 24 years before, during Jack the Ripper’s gore-spattered reign. Young prostitute Mary Kelly stumbles upon a beaten man in a Whitechapel alley, filches his money and scurries off. Later, though, she finds the victim hospitalized, his memory lost. Guilt-ridden but recognizing an opportunity, Mary tells the seemingly gentle man she christens “John Argyll” that they’re betrothed, and she’ll see to his care—using his money, of course. But Argyll is at the center of a cover-up that will precipitate the killings of several women and force him to choose between a grim past and an uncertain future. A dynamic, if not wholly original, re-imagining of the Ripper mystery.

Disappeared, by Anthony Quinn: Elderly Alzheimer’s patient David Hughes has vanished from his rural home in Northern Ireland. His sister fears he’s wandered off into trouble, but as Insp. Celcius Daly investigates, he discovers that Hughes isn’t just some quiet country putterer. He’s part of a larger, much more complicated tale connected to the years-ago slaying (by the Irish Republican Army) of an alleged political informer and the more recent torture death of an ex-intelligence agent. It’s soon clear that the errant Hughes harbors secrets in his deteriorating mind that others don’t want released. Quinn enriches Disappeared with Irish history and does an excellent job of ratcheting up the tension as his plot unfolds.

Dominion, by C.J. Sansom (UK): Taking a break from his Tudor detective series, Sansom delivers a spy adventure rooted in an alternative Britain of 1952—a dozen years after that nation surrendered to Nazi Germany. Britons are chafing under authoritarianism and worried by the sudden deportation of their Jewish neighbors, while Winston Churchill’s Resistance movement grows. Civil servant David Fitzgerald, who’s always kept his anti-Nazi activities low-key, is suddenly asked to kidnap a former university chum, misfit Frank Muncaster, from the mental hospital where he’s been held since learning a top scientific se

cret. After his cover’s blown, David and Frank escape to a smog-imperiled London, one goose step ahead of a determined Gestapo manhunter. Fans of Robert Harris’ Fatherland should relish Sansom’s slow-burning narrative.

The Gods of Gotham, by Lyndsay Faye: Set in an alien but captivating New York City of 1845, this character-propelled yarn introduces Timothy Wilde, a disfigured and love-starved ex-bartender hoping to acquire fresh purpose by joining the nascent New York Police Department. Wilde rapidly becomes embroiled in the mystery of a young girl who escaped from one of the town’s better brothels, drenched in blood. Plumbing her story leads Wilde to a field glutted with concealed corpses and into the midst of anti-Irish violence that could destroy New York just as surely as the flames that periodically besiege its skyline.

The Impeachment of Abraham Lincoln, by Stephen L. Carter: This fascinating “what-if” thriller has President Abraham Lincoln surviving the attempt on his life in April 1865. Two years later, radicals within his own Republican Party—believing the post-Civil War South deserves harsher treatment than Old Abe has meted out—connive to oust him from office. Meanwhile, Abigail Canner, a brilliant young African-American law clerk, pursues the loose threads of a political conspiracy involving the murder of one of Lincoln’s attorneys, coded messages and a packet of letters that—suspect though they are—might yet prove invaluable to the president’s defense.

The Paris Deadline, by Max Byrd: Toby Keats is a still-traumatized World War I veteran who, in 1926, works as a rewrite man in the Chicago Tribune’s Paris bureau. His peaceful existence is upset, though, when he receives what may be Vaucanson’s Duck, a “somewhat scandalous” 18th-century automaton that’s coveted by an American banker, a delightful and resourceful young woman from the Thomas Edison Doll Company and criminals who may covet the phony fowl for its mechanics—technology that could further advance weapons development. This is a suspenseful and sometimes humorous caper well-nestled in a loving re-creation of Jazz Age Paris.

Prague Fatale, by Philip Kerr: Ever-cynical series protagonist Bernie Gunther is back in harness as a Berlin police detective, investigating the 1941 stabbing death of a Dutch worker. The case introduces him to a fetching good-time girl, Arianne Tauber, but brings few other satisfactions, so he only mildly resists being summoned to Prague by his old Nazi boss, Reinhard Heydrich. Heydrich fears he’s being targeted by one of the colleagues gathered in a country house to celebrate his latest promotion, and wants Gunther’s protection. After one of Heydrich’s aides is shot dead in a locked room, Gunther must defy his superiors and endanger Arianne, knowing all along that the murderer’s rank may ultimately save him from prosecution.

The Yard, by Alex Grecian: It’s 1889, a year after the Ripper killings, and London’s Metropolitan Police Force faces another series cutthroat—this one targeting members of its own Murder Squad. Assigned to capture the perpetrator is newly promoted Det. Insp. Walter Day, who’ll turn for assistance to Dr. Bernard Kingsley, a forward-thinking pathologist. Meanwhile, young Constable Nevil Hammersmith delves into the mystery of a boy abandoned in the chimney of a private residence—a case that will see him stripped and drugged by the home’s comely mistress, and make him a target for the same assassin Day and Kingsley are struggling to bring down.