You've Got A Lot Of Luggage In Your Name 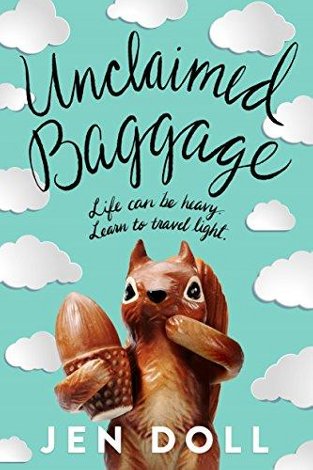 This cover is adorably zany, just like the store where our main characters work. I really want to know who in the world is packing this squirrel figurine in their luggage. Is this a souvenir from a vacation someone’s weird aunt took that was going to be their unfortunate birthday present before it was fortunately lost? The fact that it has nothing to do with the story itself invites you to get curious and warm up your thinking cap so you’re primed to make discoveries and silly assumptions alongside our protagonists.

Nell and Grant are having a rough summer so far. Nell just moved to Grant’s small town from Chicago, leaving behind her best friends and, more importantly, her amazing boyfriend, Ashton. Grant was/is the town’s football darling, though his issues with alcohol and that incident that happened last month are taking a toll on his psyche and his social standing. Both of them are forced by their moms to look for jobs, and that’s where Doris’s same-old, same-old summer is about to get really interesting.

Doris is a veteran at Unclaimed Baggage, a store that sells items from lost or abandoned luggage from airports around the country. She loves her weird little work family, and it’s suddenly grown with the addition of Nell and Grant as her newest storeroom sorter-bees. The three aren’t the likeliest of companions, especially with Doris and Grant’s complicated past, but Nell needs all the friends she can get to teach her the ways of the South. If they can manage to get along, this might just be a summer they’ll never forget.

I would so join the storeroom gang! Doris is unapologetically herself in her tiny ‘Bama town, and herself is an agnostic liberal who doesn’t care about football or church. (Bless her heart!) She takes her aunt Stella’s advice seriously, to be a “connector” between people rather than the cause of strife. Doris may be more forgiving than I would be in her shoes, but that just makes her an amazing person. Nell is the kind of friend most people would want as a teenager—or even as an adult, who am I kidding—someone you connect with right away, who listens without judgment and supports those she loves like the best kind of cheerleader. Grant, despite going through a rough time of his own making, defies his football star stereotype and actually uses his Southern charms for good. He’ll be an upstanding member of society one day, as long as he spends less time with yes-men and more time with real people like Doris and Nell who aren’t afraid to call him on his bullshit.

While this book is mostly about friendship, there are some charged moments between golden-boy Grant and town-weirdo Doris. Before anything can get serious, though, secrets need to be revealed and issues need to be confronted. If that happens, there could be a real shot for these two headstrong individuals. Meanwhile, Nell is worried her relationship with Ashton won’t be able to stand the long distance, and she’s hoping a visit from him will prove their love can be enough.

If you judge this book by its upbeat cover and quirky concept, you may go into Unclaimed Baggage thinking this will be a lighthearted summer read. I wouldn’t say that’s an entirely unfounded concept, but there was a surprising amount of depth I wasn’t expecting. Doll doesn’t shy away from real issues that a lot of beach reads would skim over, and she casts an observant eye on the often hypocritical closed-mindedness of small towns. Seeing that she is an Alabama native who now lives in Brooklyn, I can imagine she might have had a lot of personal anecdotes to lend to the characterization of Doris and the residents of her fictitious village. I found Doll’s writing style to be perfect for the contemporary style; it was conversational and aware of itself without being too cutesy. I think it’s safe to say she’s got a new fan right here.

Doris and Stella, her mom’s younger sister, had a special bond that is felt throughout the entire novel, even though Stella died the previous summer in a tragic accident. They were kindred spirits in a place that frowns on marching to your own drum. Doris is all the better for having that kind of presence in her life, and it made me think about the people outside my immediate family who had an effect on my upbringing. I hope that, as an Old myself now, I can be that kind of positive influence on a younger person one day.

The only part of the book that confused me was the occasional in-between chapter where the narrator would be…a sentient piece of luggage? “Daphne”, as Nell names her, is a purple leopard print carry-on that has a bit of a mystery attached to her. But once said mystery was revealed, her presence (and overall relevance) faded away. I wasn’t opposed to this as a plot point, but I think it could have been incorporated into the main story in a way that made more sense.

I am not, by any stretch of the imagination, a football fan. There’s a bit too much standing around, resetting, and commercials for me to ever really get into an NFL game. (And with every new thing I learn about how insidious and greedy team owners can be, the lack of concern for player safety, and the almost cult-like hero worship our society has for these athletes, the less and less I like it.) It made my blood boil to see Grant’s football coach, THE ADULT in this situation, making excuses for his behavior and pretty much encouraging him to flout the law and consider himself “better” than everyone else. Go warm the bench, Coach; you’re out of line and out of the game.

Nell’s boyfriend, Ashton, is half-black, and when he comes to visit, well…you can imagine the reception he gets from some people (read: racist mothercussers).

When you grow up with the same people your entire life, you may think you know them. But while you looked one way on the outside, Book, once we finally got some real alone time together, I realized that you are actually quite layered, funny, and deep. I can see this easy-breezy high school relationship lasting well after graduation.