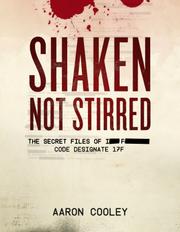 The protagonist of Cooley’s fiction debut calls himself “Ioan” and responds to “Phlegm,” but it won’t take the savvy reader long to figure out who he really is. Who else worked for naval intelligence during World War II before going on to create the world’s most famous spy? Ioan, who has spent the first years of the war longing to get out from behind a desk, is delighted to be sent on a mission to the Belgian Congo, where he is under orders to determine if longtime double agent Dusko Petrovic has gone from spying for the British government to working for the highest bidder. Petrovic, a fictional version of World War II spy Dusko Popov, keeps Ioan guessing about his loyalties as they move from bar to casino to copper mine, on the trail of—or perhaps cooperating with—Nazi officers. In the course of his adventures, Ioan encounters plenty of Bond trademarks, from gadgets to dinner jackets to the perfectly prepared martini, which is introduced by a classic Bond girl, who brings along a web of her own entanglements. The frenetic thriller plot races through a constellation of names, events and places familiar to any World War II buff or fan of Ben Macintyre’s books: Operation Mincemeat, Agent Zigzag, Double Cross, among others. The book’s greatest strength is that it plausibly incorporates historical fact without ever taking itself too seriously, always ready to wink at another Bond artifact. While the writing itself is not always spectacular, the reader is likely to be turning the pages too quickly to notice.

A Fleming-esque spy novel that keeps the story moving without ever losing its sense of fun.