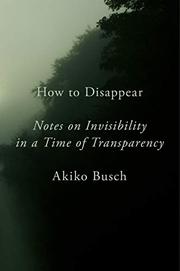 Notes on Invisibility in a Time of Transparency

The joys of hiding from a cyberculture seeking to monitor your every move.

Despite the subtitle, these are by no means “notes” but rather fully formed and often powerful explorations of the many realms and levels of invisibility to which one might aspire or withdraw. Busch (Design Research/School of Visual Arts; The Incidental Steward, 2013, etc.) starts in the woods, the narrative beginning like a meditation on going “off the grid.” Yet she veers in less predictable directions, abandoning Alexa and the like for an inquiry into children’s literature, the persistence of invisibility within it, and the value of having an imaginary friend—which, it turns out, may not be that different than the digital friendships adults cultivate. This analysis inevitably leads to social media and the persistent pressure to be noticed by others, to risk “Facebook depression, one result of this ceaseless exposure…the anxiety induced by social comparisons and the feeling of being less attractive or accomplished than other users.” The author expounds on her suspicion that we’re doing things wrong, overemphasizing visibility and self-promotion and undervaluing the opposite, and she surveys the invisible in nature, the arts, identity, and soul. It “is not the equivalent of being nonexistent,” she writes, and subsequently elaborates, “it is nuanced, creative, sensitive, discerning.” Busch examines how erasure has functioned in art, from “erasure books” that add to the texts by subtracting words, to the ability of the flamboyant David Bowie to appear invisible as a public persona while walking the streets of New York and the refusal of the popular, pseudonymous Italian novelist Elena Ferrante to use identity, biography, and personality to market her novels. Where the assertion of one’s identity is concerned, Busch argues that less is more: “The measure of our humanity may be derived not from how we stand out in the world, but from the grace and concord with which we find our place in it.”

With a tone that is more evocative than provocative, Busch meaningfully celebrates value where it goes unseen by others.