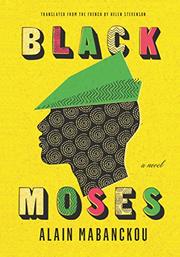 This ribald, acerbic, and poignant coming-of-age story throws open a window to an African nation’s struggle for maturity.

Mabanckou’s crafty, edgy bildungsroman is set in the author’s native Republic of the Congo (or Congo-Brazzaville, as it is often called to distinguish it from the Democratic Republic of the Congo, formerly known as Zaire). Its hero bears the unwieldy name Tokumisa Nzambe po Mose yamoyindo abotami namboka ya Bakoko, whose rough translation is: “Thanks be to God, the black Moses is born on the earth of our ancestors.” Little wonder he’s called “Black Moses” or “Moses” or even “Mose” for short at the orphanage on whose doorstep he was abandoned as an infant. Life for Moses is bewildering but relatively bucolic until his 13th year, when the orphanage’s priest—who served as surrogate father to him and the other boys—vanishes and its director announces a new regime of strictly enforced obedience to the ruling Congolese Workers' Party. If anybody’s more evil than the director, it’s the 17-year-old twins Songi-Songi and Tala-Tala, who impose their own reign of terror on the other orphans, complete with sadistic physical reprisals. Moses fears such reprisals when he laces their food with hot pepper, but the twins recruit him as a collaborator (whom they later dub “Little Pepper”), and all three escape to the seaside metropolis of Pointe-Noire, where nefariousness on an even grander scale awaits them. Though no dates are provided, those familiar with the tumultuous history of Congo-Brazzaville in the 20th century are able to figure out that the disruptions and upheavals in Moses’ life occur in tandem with the ascent of the country’s totalitarian, repressive, and often corrupt politics in the 1970s, '80s, and '90s. But it’s not necessary to know such details to appreciate Mabanckou’s narrative ingenuity and his authoritative compassion toward his people’s history, both collective and personal.

This tightly contained, densely packed story issues a challenge that never loses its urgency: how does a person cling to a sense of autonomy when it’s under siege by so many powerful forces?