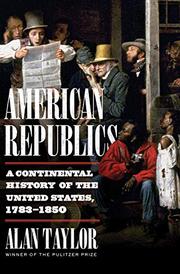 The acclaimed historian offers a relevant follow-up to American Revolutions (2016).

In a book that falls midway between narrative survey and classroom text, Taylor continues the story of the settlement and conquest of what became the lower 48 states. The author, a two-time winner of the Pulitzer Prize and professor at the University of Virginia, is among the few historians who would attempt such a history of this single century of the American past. With characteristically graceful prose, he relates the costs and limits, as well as gains and triumphs, of the nation’s sweep westward after the Revolution. His subjects—events, wars, laws, treaties—will be familiar to those who paid attention in their American history courses, but Taylor presents them in fresh, thought-provoking ways. Three themes run through the book, whose basic narrative concerns the search for “elusive security.” First, nothing was foreordained; many nations and peoples fought over the same territory when the American republic was weak and vulnerable. Second, based on unassailable evidence, crippling payments were exacted from non-White people in the pursuit of Manifest Destiny to conquer much of North America. Third, it wasn’t all about White men; women, Native Americans, and African Americans played significant roles on all sides in the politics, military battles, land settlements, and opposition to American encroachments on others’ territories. Readers will encounter many little-known characters who advanced, thwarted, honored, and sullied American ambitions. It’s not a pretty picture, but such warts-and-all history is now conventional among scholars and considered more congruent with historical realities than the drum-and-trumpet stories that used to be the standard approach of historical narratives and textbooks. Though the narrative lacks an overall argument and ends in an abrupt, somewhat jarring fashion, Taylor is always a consummate guide to the early republic.

A fine new look at a critical period of American history.