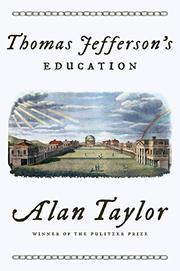 The two-time Pulitzer Prize–winning historian enlightens us on the mindset of Colonial Virginia through Thomas Jefferson’s drive to change the education system.

Beginning with young Jefferson’s student days at the College of William & Mary, Taylor (History/Univ. of Virginia; American Revolutions: A Continental History, 1750-1804, 2016, etc.) describes a church-run school whose students had little or no interest in learning; few stayed long enough for a degree. They were irreverent and defiant, and they drank, gambled, fought, and even destroyed church and town property in drunken riots. Due to certain entrenched rules about honor, no Southern gentleman would testify against a fellow student. Within this milieu, Taylor depicts Jefferson as a man trained from childhood to exercise sovereign authority over slaves. Jefferson felt slavery was wrong in principal but essential in practice, and his abolition plan could only work with deportation. Officials in Virginia used the Bill of Rights’ guarantee of free exercise of religion to ban state assistance to churches and repealed the incorporation of the Episcopalian Church. This included cutting funding and eliminating the parish tax. Jefferson fully supported this secularization and planned to use those savings and taxes for a public education system. His master plan included primary schools, including girls, and colleges (secondary) run by each county feeding one university—at Charlottesville. His schools were to be absolutely secular, and while rejecting leadership by blood, he ensured that class distinctions remained, seeking enlightened aristocrats of merit. The narrative bogs down a bit at the end with the history of the university, but Taylor is a master historian, and he delivers a highly illuminating account in which “Jefferson’s social context in Virginia looms even larger than his unique personality and career achievements.” Furthermore, the author plumbs the depths of his subject’s objectives, faults, and ideals.

A book that refreshingly adds real substance to the abundant literature on Jefferson.