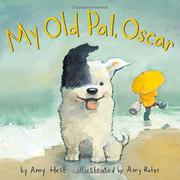 Alone at the beach, a black-and-white puppy huddles under the pier until it spots a child.

The blond, white child plays alone with the puppy nearby, feigning indifference even while cataloging the puppy’s lack of tags, big feet, “soft puppy beard,” and “big black eyes.” The persistent, perky pup doesn’t accept the child’s emphatic goodbye and gets an earful about the late, beloved Oscar. “You want to be pals. / Well, we can’t be pals. No sir. No way. / Won’t. Ever. Do. That. Again. Ever. / You know who was my pal? Oscar.” Bates’ striking watercolor-and-pencil illustrations let an autumnal spectrum of muted oranges, yellows, and grays flow across the pages. The spray of the waves, the far-off cries of the gulls, and the salted breeze of the sea are expertly evoked in these frames. But the deficit of honest emotion in Hest’s scenes between puppy and child serves to rebuff rather than involve readers. Even the child’s pervading melancholy is communicated in a sterile, forced manner. “The waves were really, really big, and I was really, really sad.” No one will be surprised that the child eventually takes the puppy in, though readers who might have lost dogs themselves will be taken aback that there is no evidence of a search for this puppy’s owner.

Hest and Bates’ previous joint dog project, The Dog Who Belonged to No One (2008), was a more tender and effective narrative.