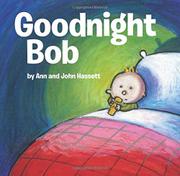 Tucked in bed with a flashlight, Bob looks out the window to a crescent Moon, who smiles down and says, “Goodnight Bob.” Alone in the dark, Bob sees two round, white eyes glow, and when he shines his flashlight, Fish appears in his bowl and also says goodnight. This pattern repeats as each successive pair of white eyes in the dark turns into a cat, dog, mouse, Bigfoot (outside the window), and the stars in the night sky. The simple, predictable text will have children chiming in quickly: “Bob saw two eyes. / It was Dog. ‘Goodnight Bob,’ said Dog. / Bob saw two eyes. / It was Mouse. ‘Goodnight Bob,’ said Mouse.” Finally settled in and with eyes closed, Bob is asleep as the moon and stars give another goodbye and the footprints of Bigfoot recede down the path from the house. The simplicity of this repetitive story is accentuated by the primitive cartoonish pastel drawings in primary colors. Bob is a very young Charlie Brown–type figure with light skin, two dotted eyes, a circle nose,  and four bristly lines for hair atop his very round head. Bold white text against a dark blue nocturnal background facilitates repeat reads.

A sweetly simple bedtime book with a reassuring message.