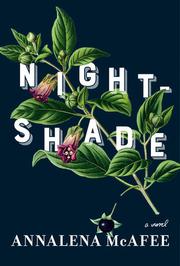 Walking across London after dark, an artist reviews her past and fears the future in McAfee’s pitch-black new novel.

Eve Laing grows and then paints plants in jewellike works that have garnered her some success but also condescension as a dainty, feminine artist. This infuriates her almost as much as the fame of her one-time friend, a confessional performance artist Eve dissed years ago with a widely reprinted wisecrack: “Wanda Wilson’s sole talent is for monstrous self-pity.” She’ll live to regret that remark in the jaw-dropping finale to a masterfully orchestrated narrative that fully justifies its pervasive atmosphere of lurking dread. When we meet Eve, she’s looking through the window of the town house where she used to live with her husband, Kristof. Eve left him five months ago, consumed by her new project and by Luka, the young assistant who has become her lover. At 60, Eve has decided to finally silence her patronizing critics with Poison Florilegium, a seven-panel depiction of deadly plants “lovely as their innocent sisters, venomous as snakes”; she views it as a tribute to “all those female artists…who laboured in the shadows.” As her memories unfold during her walk, we learn that Eve’s bitter determination stems from ancient wounds: an unhappy childhood, a humiliating affair with her famous art teacher, frustrations as a wife and mother. These injuries have rendered her both cruel and vindictive: “stringy Nancy, with her unfortunate recessive chin” is among Eve’s kindest comments about her daughter; and her revenge on an old friend who had a fling with Kristof is shockingly excessive. Eve isn’t meant to be likable—McAfee’s whip-smart text implicitly makes the point that no one objects to male artists being selfish and unkind—but she’s desperately human. We understand her rage and wince at her blindness to the dangers right under her nose in a text as studded with red-flag clues as it is with penetrating insights.

A brilliant character study encased in a gripping plot with a fabulous final twist.