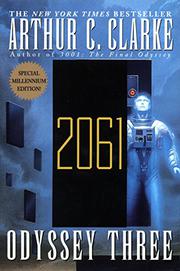 Clarke's Odyssey yarns, like Herbert's Dune and Asimov's Foundation, have been self-perpetuating if, thus far, unimpressive. The far superior Kubrick movie overshadowed 2001; 2010 was inventive but flatly undramatic. This, happily, is the most gripping and stimulating entry to date. Savvy readers will be tipped off by the title date: yes, Halley's comet is returning to the inner solar system. Aboard state-of-the-art spaceship Universe, a crew of scientists—including Heywood Floyd, now ancient but still fit, thanks to years of low-gravity living—will rendezvous with, and land on, Halley's comet. Meanwhile, astronomers in the Jupiter system observe the appearance of a huge, enigmatic mountain on the moon Europa. (Readers will recall that, in 2010, the intelligence controlling the ubiquitous monoliths turned Jupiter into a mini-sun in order to foster the development of intelligent life on Europa; humans were warned to keep off.) Then, a ship touring the Jovian moons is forced to crash-land on Europa by a fanatical Afrikaner saboteur. Why? Well, the embittered, vengeful Afrikaners (booted out of South Africa) have learned that the mountain on Europa is made of—pure diamond! (An irresistible prize as far as the Afrikaners are concerned.) Ship Universe speeds to the rescue—but what of the ban against landing on Europa? Will the still-mysterious, immensely powerful monoliths interfere? With starchild Dave Bowman and computer Hal waiting in the wings, Clarke provides intriguing and satisfying answers. The all-round best Odyssey so far. Indeed, Clarke, with an absorbing blend of scientific extrapolation and events that generate their own tension, has returned to something like Vintage form after years in the fictional doldrums.