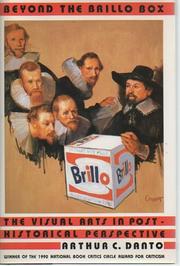 BEYOND THE BRILLO BOX

The Visual Arts in Post-Historical Perspective

Sixteen philosophical essays (most previously published in academic journals) that, in the vein of Encounters and Reflections (1990), wrestle with questions of art by the critic who contends that Andy Warhol brought Western art history to an end. What Danto (Philosophy/Columbia) does so brilliantly is to take Warhol's Brillo Box, or a painting by Mark Tansey, or the growing presence of museum stores and then, by invoking Hegel, Kant, Rembrandt, etc., set these art-world phenomena ablaze with meaning. A solid-black canvas in a 1990 exhibition becomes a symbol of the final moment of the Modernist narrative—what Danto calls ``the end of art''—just as an open window seen soon after at the Museum of Modern Art's ``High & Low'' exhibition signifies the opening-up of the museum to real life. Not without humor does Danto, in ``Censorship and Subsidy in the Arts,'' compare crowd- pressed viewers at the Boston Museum's Monet exhibition with pilgrims at Santiago de Compostela, both being ``in the presence of things of great moment, worth a sacrifice.'' In another of the most engaging pieces here, ``The Museum of Museums,'' he explains the country's ``resurgent puritanism'' as stemming in part from ``the sense of the Temple profaned.'' Confronting Robert Mapplethorpe's ``terrifyingly obscene'' photographs, Danto claims to hate the experts who read them purely as ``formal exercises.'' And he persuasively argues that ``art cannot be integral to meaningful lives without the shadow of dissent, difference, offense.'' Danto's arguments on the nature of art, metaphor, beauty, values, and narrative tradition are long, detailed, and complex: ``Explanation through reasons as against explanation through causes connects with our distinction, in the way they tend to cancel one another out.'' An intellectual update from a profound thinker whose voice enhances the art and culture he contemplates. (Thirteen illustrations—not seen.)