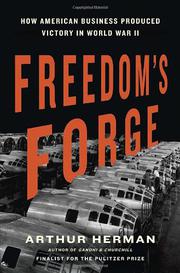 It’s not often that a historian comes up with a fresh approach to an absolutely critical element of the Allied victory in World War II, but Pulitzer finalist Herman (Gandhi & Churchill: The Epic Rivalry that Destroyed an Empire and Forged Our Age, 2009, etc.) has done just that.

The author argues powerfully against the conventional wisdom that America’s rearmament took place under the guidance of a competent federal government that brought business and labor together for the country’s defense. To the dismay of New Dealers who had hoped to use the war to bring business under government control, the production of the flood of war materiel that drowned the Axis was achieved by the voluntary cooperation of businesses driven as much by the profit motive as by patriotism, solving problems through their own ingenuity rather than waiting for government directives. The physical and organizational challenges were overwhelming. The production of sufficient familiar armaments required expanding existing moribund plants and constructing new ones, then manufacturing new machine tools and organizing their use to maximize efficiency. Doing the same for enormously complex new weapons, in particular the B-29 bomber with 40,000 different parts made by 1,400 subcontractors, was an even more staggering task, exacerbated by materials shortages and recalcitrant labor unions. A story resting on the statistics of industrial production runs a constant risk of lapsing into tedium, but Herman’s account never falters. He carries it off in engaging style by centering this sweeping narrative on the efforts of two colorful business leaders, Henry Kaiser and William Knudsen, who led the struggle to produce ships, planes and arms for Britain and then for America in a war that many had persisted in believing wasn’t coming.

A magnificent, controversial re-examination of the role of American business in winning WWII.