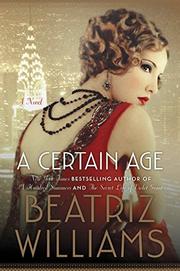 A tale of Manhattan society in the Jazz Age, spiced liberally with secrets and scandal.

Williams’ latest opens with a dispatch from “Patty Cake,” a jaded society reporter from a New York paper, covering a “Trial of the Century” in Connecticut. We don't yet know who's on trial, but two of the women in the courtroom that day take up the narration of events that led to this pass. Theresa, a 44-year-old Fifth Avenue socialite, and her lover, Octavian, 22, are surprised in the carriage house of her Long Island estate by her brother, Edmund Jay "Ox" Ochsner, who reveals his intention to marry 19-year-old Sophie Fortescue, youngest daughter of the so-called Patent King, an entrepreneur and inventor who made his fortune as his nickname suggests. The Fortescue millions will assure financial security for this pedigreed but cash-poor bachelor gadabout. There follows a retelling of Der Rosenkavalier for the Roaring '20s. Octavian, a World War I flying ace whose war wounds are mainly mental, is enlisted by Theresa to act as cavalier for Ox, delivering a rose-shaped engagement ring to Sophie at her father’s unassuming home on 32nd Street. The two young people are smitten, but Sophie agrees to the engagement to please her father, who wants a traditional family life for her, although her real desire is to exercise her own mechanical aptitude. Meanwhile, Theresa learns that her marriage of convenience is coming to an end—her husband wants to marry his mistress. Now the way is clear to wed Octavian, except that the cavalier’s affections have shifted. Sophie is repelled by Ox’s dissolute, gin-swilling ways, his peppermint hair oil, and his boorish attentions. Testimony at trial recalls a Greenwich, Connecticut, house once occupied by a mechanic, who disappeared with his two daughters after his wife was found murdered. Chapters oscillate in time, ending on cliffhangers that can be jarring, but this novel is mainly propelled by its period-perfect prose style.