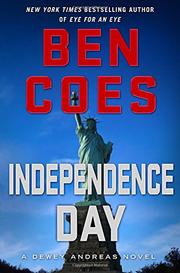 In Coes’ (Eye for an Eye, 2013, etc.) last novel, Dewey was dealing with the death of his true love by dishing out a hearty helping of remorseless violence on his path to vengeance. At the beginning of this new adventure, we find Dewey hiding out from the world in his childhood home, the quaint fishing village of Castine, Maine. Dewey, however, cannot escape his former life as an elite Delta operator and the classified missions from his days in the CIA as a nonofficial cover agent. When Dewey’s friend and former boss, CIA Director Hector Calibrisi, finds him, Dewey is reluctantly brought back into the fold of covert operations. While his first mission is a relatively simple assault of a drug operation in Mexico, a much larger threat looms on the horizon. A mysterious, but legendary, computer hacker known only as Cloud acquired a black-market nuclear bomb from a Russian Mafia kingpin and, with the help of Chechen jihadis, is planning a terrorist attack on America’s birthday, the Fourth of July. To prevent this atrocity, Dewey must regain his stone-cold composure and his unique talent of accomplishing the mission at all costs. Along the way, a degree of insight into the current sociopolitical dynamic between Russia and the U.S., and inside the American political landscape, gives this action-packed thriller a sense of realism.

A realistic and entertaining page turner.