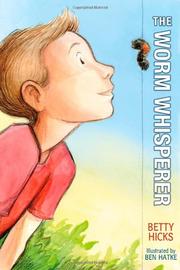 Animal-obsessed Ellis Coffey hopes his pet woolly caterpillar will win the race at the Banner Elk Woolly Worm Festival and its $1,000 purse so he can pay the deductible for his father’s back surgery.

Money is tight in Ellis' family, and the fourth-grader has more than the usual worries and responsibilities. He helps out a lot at home, but he still has time to explore the woods behind the family's blueberry farm in the shadow of the Smoky Mountains. That’s where he finds the caterpillar he names Tink. Feeding her, dealing with her excrement (which, he learns, is called frass) and keeping her safe are some of the challenges he faces in this unusual pet story. Readers can’t help but admire this boy who is trying so hard to be helpful. At school, his teacher describes him as “class-clown-but-with-brains” and encourages his interest in new words. There is humor in Ellis’ efforts to keep Tink hidden on an outing to church and plenty of suspense right up to the race itself. And then there’s the question: Can Ellis really talk to animals like Mrs. Puckett, the horse whisperer? A satisfying ending neatly wraps up this warm story, and Hatke’s occasional line drawings will add appeal for middle-grade readers. (Fiction. 9-12)