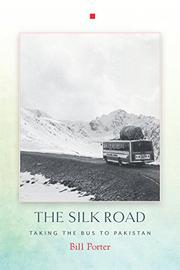 Taking the Bus to Pakistan

In this latest installment in his decadeslong journey through China, Porter (South of the Clouds, 2015, etc.) wanders westward into the mountains, never quite courting danger, never quite avoiding it.

How does one pack for a trip along what the Chinese traditionally called the Road to the West and Westerners the Silk Road? First, get a rucksack, not a pack with a rigid frame. Then put some whiskey in a flask and put the flask in the rucksack. “Once I had the pack and the whiskey out of the way,” Porter, aka Red Pine, amiably writes, “the rest was easy: a couple changes of clothes, silk longjohns, a cashmere vest, a lightweight jacket, a wool hat and gloves.” An extra stomach lining and a big shovel might have come in handy, as we learn, following Porter’s travels from Xi’an into the desert and high country. Fortunately for Porter, though beset by some appallingly bad food, a goodly number of con artists, and a brush with death along a cliffside highway in the Karakoram, he had his wits with him, as well as a firm command of history and literature. Occasionally, his approach to all that learning is a little scattershot: the great Turkic conqueror Tamerlane turns up here and there (e.g., “if Tamerlane hadn’t died, it’s quite possible there would be more mosques today in China than temples”) but sometimes as an afterthought and sometimes repetitively. Still, a little absentmindedness is fine, especially in so unflappable a travel guide. Porter is at his best when interpreting history, a touch less so when updating Michelin (“In addition to coffee and omelettes, John offered other Western favorites, like fried potatoes”) along the way from the Yellow River to the Pakistani frontier.

Fans of Owen Lattimore, The Road to Oxiana, Aurel Stein, and other like-minded ventures and adventurers will find Porter’s latest a pleasure and an inspiration.