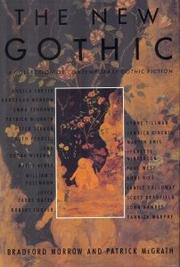 A Collection of Contemporary Gothic Fiction

Cadillac Gothic with new chrome stripping on stories going to the same old grave, by some heavy-hitters in the rich-prose department. At the Poe pinnacle of Old Gothic, all detail and landscape emerge from the tortured, fragmenting psyche of the hero. No such figure easily defines the New Gothic. Many of these tales—of which Paul West's ``Banquo and the Black Banana: The Fierceness of the Delight of Horror'' is the worst offender (it reads at times like a Burroughs cutup)—are overrich by half, and the straightforwardness of Ruth Rendell's ``For Dear Life,'' Joyce Carol Oates's ``Why Don't You Come Live with Me It's Time,'' and Angela Carter's ``The Merchant of Shadows'' blow like breaths of fresh air through the heavy vapors. The single, most well-focused story herein is Rendell's, about the cramps of horror besetting an old dowager taking her first subway ride in London. The best stylist may well be John Edgar Wideman, whose plague tale, ``Fever,'' opens marvelously: ``He stood staring through a window at the last days of November. The trees were barren women starved for love and they'd stripped off all their clothes, but nobody cared.'' The most far-out tale (that still tells a story) is Robert Coover's ugly but cuckoo ``The Dead Queen,'' a reworking of Disney's Snow White and the Seven Dwarfs from the point of view of Prince Charming on the wedding night: no matter how madly Charming performs in bed, Snow White awakens in the morning with hymen restored (as she has awakened after endless sex with the seven dwarfs before Prince Charming awakened her in the coffin that the vanity-ridden queen now lies in). Most fanciful is a tossup, but John Hawkes's ``Regulus and Maximus,'' about the sins of monks, is superpurple. Anne Rice presents a lacy Lestat the Vampire excerpt from Interview with the Vampire. All weighed together, too much and not enough. Should do well, though.