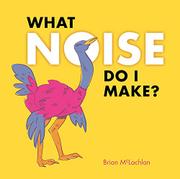 WHAT NOISE DO I MAKE?

Canadian artist McLachlan creates a new twist on the often pedestrian visualizations of animal noises depicted in many picture books in this genre.

Calling the bluff on this type of book by implicitly acknowledging that of course the actual noises animals make cannot truly be represented in text and pictures, the artist creates a lively template for young readers and their adults to improvise and vocalize the sounds of all kinds of animals, from the ordinary cats and dogs to the extremely unusual, including pangolin, kookaburra, aye-aye, and tamarin. One or two simple, cartoonlike, vividly and often fancifully colored illustrations of animals are shown on each page, with an expressive speech bubble approximating the animal’s sound—except when the sound does not portray the expected animal. What says, “Bark! Bark! ARF! ARF!”? A seal, of course! A horse and a zebra kind of look the same, but the horse says, “NEIGH,” and the zebra says, “squirp squirp.” Suspense is created when an animal is shown silent on one page, only to make a huge noise on the next. Then there is the mysterious giraffe, which says nothing for several pages and reappears at the end with a comment from a parrot: “giraffes can talk but usually don’t.”

McLachlan shows an astute understanding of how to produce belly laughs in the young; this funny read-aloud would also be a terrific prelude to a zoo visit.