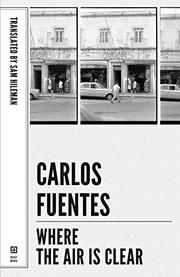 WHERE THE AIR IS CLEAR

"In Mexico City there is never tragedy but only outrage", says the poetic and tormented voice of this tumultuous philosophical and political novel. Through a multitude of characters — the decadent new international set whose lives are a frenzied orgiastic whirl; the artists and intellectuals who feel bound to and at the same time cut off from Europe; the denizens of the twilight world of the bordello fumbling through a haze of intoxication; the workers, oppressed, and desperately clinging to the promise of a lottery ticket; the displaced aristocrats who have reluctantly made their truce with the middle class — Fuentes creates a Mexico torn by its allegiance to the Revolution, racked by the guilt-laden legacy of Morelos and Zapata and yet committed to the promises of a new liberalism. He traces the complicated sources of the uprising, shifting in time from the implicit beginning of Revolution to the recent past in which the heirs of rebellion either compromise or go under — but with a sun-drenched extravagance of emotion — "if Mexicans do not save themselves, not a single man in all creation will save himself". Written with a fervor that is both fierce and compassionate this is a complex, powerful novel of huge scope.