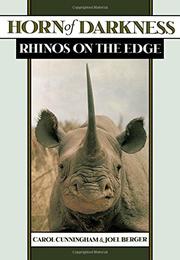 Rhinos on the Edge

An object lesson in field research hazards—both the physical and the political. Consider the black rhinoceros, fearless, scattering lions and elephants as it motors along at 30 mph. Now consider that in less than 100 years its numbers have shriveled from 100,000 to 3,000, cut down by machine-gun-toting poachers desirous of their horns, made of a keratin-like substance similar to fingernails that brings huge sums in Hong Kong; it is valued for its medicinal qualities in China, Korea, and Taiwan and as dagger shafts in Yemen. Cunningham and Berger, of the University of Nevada, Reno, spent four years in the Namibian Desert, studying in particular the effects on the rhinos of dehorning, which had come into vogue as a means of harvesting the horns' wealth while saving the animals themselves from poachers. In alternating chapters, the two authors plait their days afield into a delightful memoir: how they learned to track, to dodge rhino charges, to set up house in a Land Rover with their toddler daughter, to overcome all the logisitical problems of cameras and auto mechanics and night-vision equipment and life without a tossed salad. Berger gets in a few volleys condemning the treatment of the local population by European imperialists, and he appreciates the simple fact that starving people will understandably kill endangered species to survive. But rhinos were his preoccupation. Perhaps too much so; when he wrote a paper with his wife questioning the value of dehorning (he raised the issue of calf mortality as a possible consequence of dehorned mothers left unable to defend for them), he ran hard against national pride and the fact that legally cut horns could be sold by the state for hard currency. Namibia gave Cunningham and Berger the bum's rush and told them not to return. Consider the black rhinoceros, and pity him too; without Cunningham and Berger in his corner, his future gets that much dimmer.