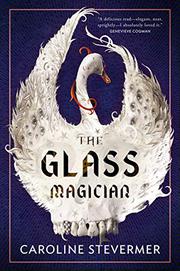 Raised to be a vaudeville stage magician, Thalia Cutler finds herself in the midst of an identity crisis when her hand briefly transforms into a feathery thing in the middle of a dangerous trick, allowing her to slip through a set of handcuffs that had jammed before she could unlock them. Thalia had never transformed before; that's something that can only be done by a Trader, a person born with the innate ability to Trade between human and animal forms, but Thalia is a Solitaire, a human without any real magic. If she were a Trader, she would have shown some sign of it by now, or so she thinks. Convinced that there’s a logical explanation for her situation, Thalia carries on, only coming to terms with her new identity when she’s attacked by a manticore, a creature that eats the magic of untested Traders. The revelation of her Trader identity is the least of Thalia’s problems, however, as the onstage death of a rival magician has made murder suspects out of Thalia and David Nutall, her business partner and father figure, and she alone can solve the mystery and clear their names. Although the three types of humans—nonmagical Solitaires, form-shifting Traders, and nature-minded Sylvestri—are mentioned early in the novel, more in-depth explanations of these labels don’t show up until much later, which may confuse some readers. Adding to this confusion, distrustful relations among the three classes often make them feel like clumsy metaphors for ethnicity, especially when we learn that “many of [the Dakota] were Sylvestri.” Ultimately, many readers will be left wanting to know more about the way the world works rather than about its star players.

A slow buildup that leads to an exciting and satisfying conclusion.