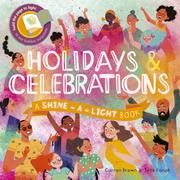 From the Shine-a-Light series

The focus is on food and fun in this yearly round of international holidays.

Beginning with Lunar New Year—properly designated an Asian celebration rather than just Chinese—the roughly chronological tally offers a mix of 16 religious, civil, cultural, and even (in the case of the Spanish town of Buñol’s “La Tomatina” festival) local holidays. Brown barely and rarely alludes to religious origins and rituals (presenting Easter, for instance, though an “important Christian holiday,” as all about hunting eggs, which are “a symbol of new life and new beginnings”) but places festive gatherings for food and frolic front and center. Konak follows suit, depicting smiling groups around tables for Eid and at a Passover seder, picnicking beneath cherry blossoms for Hanami in Japan, crowding along the green Chicago River on St. Patrick’s Day, and chucking powdered paint at one another for the Hindu festival of Holi. The groups are diverse both racially and in styles of dress. Like other entries in the Shine-a-Light series, most of the illustrations are backed with white areas and print on a solid black background so that holding the colored pages up to a light reveals hidden details. Notes at the back supply a few additional bits about each of the holidays except, oddly, the closing scene of midnight fireworks on one of the many other New Years, Jan. 1.

An inclusive, secular-leaning panorama with a simple but clever visual gimmick.