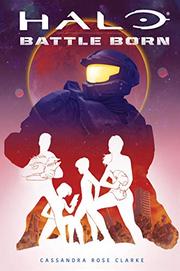 From the HALO series, volume 1

When their coastal town is attacked by an alien enemy organization known as the Covenant, four teens learn what they are capable of and what they are willing to do for the people they love.

High school students Evelyn Rousseau, Victor Gallardo, Saskia Nazari, and Dorian Nguyen didn’t make it to the town’s shelters before the doors closed. Luckily, Saskia’s house is a veritable fortress filled with prototype weapons from her parents’ jobs as defense system manufacturers. The teens, who were not close prior to this disaster, have to learn to work together as a team. During surveillance they cross paths with a Spartan, a supersoldier who fights with the United Nations Space Command, named Owen-B096. They are trained by Owen and learn that the aliens are digging up an artifact in their town. The team sabotages the drilling and forms a plan to safely get themselves and the survivors of their village of Brume-sur-Mer off their planet, Meridian. But will everything go according to plan? Clarke (Star’s End, 2017, etc.) brings the popular video game “Halo” to life with likable characters and a suspenseful, fast-paced plot. While the characters are somewhat two-dimensional, the nonstop action will draw in readers. Knowledge of the game makes the plot and terminology easier to follow. Diversity is implied through names.

A series opener that will find readers wherever the video game is popular.