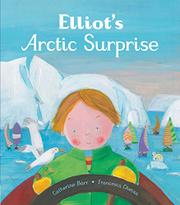 While enjoying a beach vacation with his parents, redheaded Elliot finds a bottle with a note inside from Santa asking for help from children to save the Arctic, Santa’s home at the North Pole, and the Christmas holiday.

Elliot asks his preoccupied parents for permission to go to the North Pole, and in fairy-tale fashion, a kindly sea captain with a sailboat appears out of nowhere to whisk Elliot on a longed-for adventure. When they arrive at the Arctic, they find a flotilla of colorful sailboats filled with ethnically diverse children. Led by Elliot, the children confront the men at the huge oil rig and convince then to stop drilling and go home. Elliot’s sea-captain friend then takes off his yellow rain slicker, revealing his true identity as Santa himself. The simple plot works as a sort of environmental fairy tale, and the concept of thousands of children solving a major world issue themselves is a delightful (although sadly improbable) one. Bold illustrations in acrylics and colored pencil are attention-grabbing, with bright colors and sweeping Arctic vistas. The controversial issue of oil drilling in the Arctic is a complex one, but this works as a first introduction for young children to a troubling problem. A closing note on environmental issues in the Arctic is included.

A thoughtful story with a highly unusual take on Santa as a larger-than-life character, for environmentally minded households.