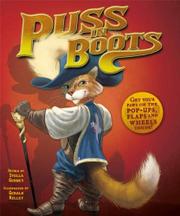 Gurney embellishes the original plotline only by furnishing the Ogre with a back story (provided in a very small pasted-in booklet) and bestowing names on the kingdom and most of the characters. Her prose stumbles (“Puss pondered over [sic] the problem of Peter’s livelihood”), and her dialogue runs to stilted lines like, “We have seen your idea of work, Peter—it is to sit around all day playing your harmonica and idling.” Illustrator Kelley does his best to add plenty of visual panache, crafting painted scenes featuring a swashbuckling ginger puss plainly akin to the scene stealer from Shrek and cleverly manipulating a Disney-esque human cast. Such movable additions as a turn-able water wheel, a pull tab that makes Puss lick his chops after devouring the ogre and even a culminating pop-up wedding tableau are, at best, routine, and they often feel like afterthoughts, enhancing neither the art nor the story.

This ageless trickster tale has a nicely subversive message, but this rendition lacks the panache to carry it off.