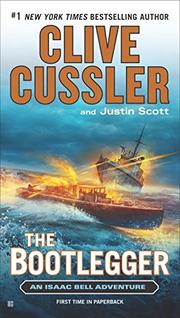 World War I’s over. Prohibition’s law. The Van Dorn Detective Agency is helping the Coast Guard chase rumrunners and bootleggers, but it’s rough sailing. Boatloads of money are being used to corrupt police, Coasties and even weaklings in Van Dorn’s agency. Things turn critical quickly when Joseph Van Dorn himself is gravely wounded in a shootout at sea. He charges his No. 1 man, Isaac, with keeping the agency running, but Isaac’s more interested in finding Joseph’s assailant. Cussler/Scott do a bang-up job with characterizations in this historical action tale, beginning with Isaac, the Jazz Age James Bond; Isaac’s protégé, beautiful former librarian Fräulein Privatdetektive Pauline Grandzau; and Marat Zolner, a Comintern operative who believes rumrunning can aid in overthrowing the international bourgeoisie. The plot’s believable, and there are fistfights, knifings or a Lewis gun spitting bullets page after page. The action shifts from New York City’s docks to luxury hotels where Isaac entertains his movie-star wife to Long Island estates. Cussler and company love historical factoids—across the Long Island landscape, bootleggers and others prowl in Pierce-Arrows, Packards and Rolls Royces. Marat’s a worthy adversary, one so amoral as to murder fellow apparatchiks sent to keep him from going rogue. There are gangs—White Hands, Black Hands and Purple Gang—flinging lead as Isaac chases Marat from NYC to Detroit (where liquor arrives from Canada via an under-river tunnel) to Miami to the Bahamas and beyond.

Great fun from one of the better Cussler series.