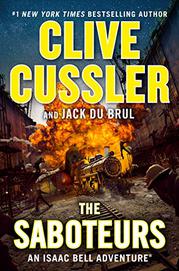 Malign forces want to slow completion of the Panama Canal, but Isaac Bell has plenty to say about that in his 12th tale of derring-do.

In 1914, the U.S. is digging an enormous ditch across the mosquito-infested isthmus of Panama, with “mechanical dragons wreathed in steam” ripping out eight tons at a time in the Culebra Cut. Horrific incidents happen, and they’re not always accidents. A mysterious terrorist group called Viboras Rojas, or Red Vipers, seems responsible for an explosion that kills dozens and delays the canal’s construction. Isaac Bell of the Van Dorn Detective Agency is sent there to investigate, and a team of wild horses wouldn’t keep his wife, Marion, from coming along. Bell keeps mighty busy. Within days, he’s “thwarted an assassination attempt and brought a mad bomber to heel,” and he’s just getting started. The detective is exceptionally observant and ingenious. How he survives a catastrophic landslide is such a combination of quick thinking and luck that readers will hold their breath as they turn the pages, only realizing later how unlikely it all is. Meanwhile, Germany conspires with Argentina to severely delay the canal’s opening—Argentina would lose plenty of oceangoing commerce, and as it girds for war in Europe, Germany fears America’s rise as a global power. The proximate villain is Otto Dreissen, who correctly believes that former President Teddy Roosevelt won’t be able to resist traveling to see “the most transformative engineering feat in history…dangers be damned”—and there is danger, since the kaiser has authorized Roosevelt's assassination. But first Dreissen must arrange an “accident” for Bell, the “man with the nine lives of a cat.” Poor Otto. He should know it’s not that easy to kill off a series hero. Nor a series hero’s wife, even when she’s dangling from a dirigible. A bonus tip to readers: Stay away from manchineel trees and superheated steam.

Fast-paced fun that’s fraught with peril. The Bells are such a nice couple.