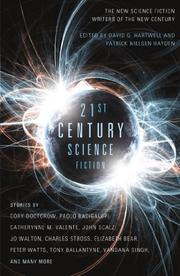 A bumper crop of 34 stories from authors who first came to prominence in the 21st century, compiled by two of the most highly respected editors in the business.

Thematically, all the entries are science fiction even though some are from writers better known for their fantasy. Some stories won or were nominated for awards, as were many of the authors. Dipping into the pool at random, readers discover Cory Doctorow meditating on the society that results from a handful of hyper-rich owning and running everything; intelligent warships that become infected with Asimovism (John Scalzi); Charles Stross’ amusing but rather gloomy glimpse of an all-too-possible future; Elizabeth Bear's dying war machine that befriends a semiferal boy; Paul Cornell's alternate world, where physics itself is different; a drug that brings dramatic psychological changes while some things are eternal (Daryl Gregory); and a robot existential crisis from Rachel Swirsky. Elsewhere, the brilliant Ken Liu offers another wrenching tale of a researcher into artificial intelligence who finds she can no longer distinguish between the artificial and the real; Neal Asher presents an Earth swarming with almost unimaginably advanced aliens; Ian Creasey writes of a not-so-distant future when humans adapt themselves to survive in alien environments; Karl Schroeder’s characters lose themselves in virtual realities; David Levine tries to sell computer software to aliens who have no need of it; Vandana Singh’s mathematician has a revelation; and the remarkable Hannu Rajaniemi again pushes the envelope farther and faster than anyone else. And all these are not necessarily the best on display here, just a sample.

Grab this book. Whether newcomer or old hand, the reader will not be disappointed.